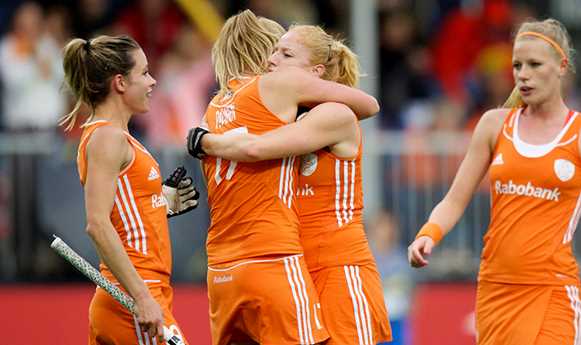 Day 3: Double Olympic Gold medallist Maartje Paumen celebrated Olympic Day with two goals in her 200th international match, as her Netherlands team made it three wins from three in the FINTRO Hockey World League Semi-Finals in Antwerp. The Dutch are firmly in control of Pool A, while New Zealand also maintained their winning ways in the Olympic qualification tournament by powering to victory against Pool B opponents India. More information about the matches can be found below.

Pool B
New Zealand 5-0 India
New Zealand’s Black Sticks claimed their second win in two matches by defeating India’s Eves 5-0 in the only women’s Pool B match to be played on Day 3 of the FINTRO Hockey World League Semi-Finals. The result moved New Zealand onto six points, giving them plenty of confidence ahead of their Oceania derby showdown with Pool B rivals Australia on Thursday (25 June).

As in their first game, the Black Sticks were in irresistible form, with Gemma Flynn giving her side the lead with an audacious overhead smash in the first period before Olivia Merry doubled the lead in the second. Flynn grabbed her second goal of the game and sixth of the competition shortly after the break before Kirsten Pearce bagged a quick-fire double.

“It was another good performance by the girls and good to get another three points”, said New Zealand captain Anita Punt after the game. “We have Australia next so that will be fun, but we have been trying not to think about that one up until this point as we needed to focus on the earlier matches.”

After two matches, India remain without either a point or a goal in the competition, although it was a milestone day for Shushila Pukhrambam, who played her 100th match for the Eves.

Pool A
Japan 0-4 Netherlands
Maartje Paumen celebrated her 200th international appearance with two goals as the Netherlands made it three wins from three matches. The reigning World, Olympic and Hockey World League champions moved onto nine points and look odds-on favourites to finish top of Pool A. The Dutch leader and penalty corner star opened the scoring in the 13th minute with Naomi van As adding a second ahead of half time. Two goals came in the fourth quarter, with Paumen grabbing her second before Xan de Waard completed the scoring five minutes from full-time.

“We are satisfied so far, but of course we can still improve our game”, said Van As. “It was a big improvement from our match against Korea where we had two quarters which were a little bit sloppy but today we were much more disciplined. They were difficult to break through but were showed patience.”

Netherlands captain Maartje Paumen was delighted with the victory in her milestone match. “For me it was a really special day, of course. Before the game I received a lot of messages saying well done on reaching 200 and I also spent some time thinking about what we have achieved during the last eleven years. It really was a special moment for me.”

It was also landmark day for Japan’s Myumi Ono, who like Paumen was also celebrating her 200th senior international match.

More information about the competition including video clips, imagery and official tournament information can be found on the event website. #HWL2015 #RoadToRio