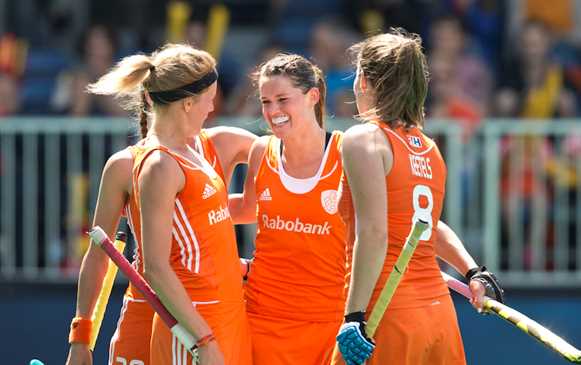 Day 7: Following a Thrilling Thursday of men’s action, Fantastic Friday was all about the women as the pool phase of the FINTRO Hockey World League Semi-Finals came to an end and the line-up for the cross-over quarter-finals became known.

Maartje Paumen scored a hat-trick against Italy as the Netherlands finished top of Pool A, with Oranje now facing a quarter-final match-up against India, Pool B’s fourth placed team. Anita Punt and Gemma Flynn were on target as New Zealand defeated Belgium’s Red Panthers to seal a first place finish in Pool B and will now meet Japan in the last eight.

The other two quarter-finals - which take place on Tuesday 30th June - will see Korea taking on Belgium and Australia doing battle with Italy as the race for the Hockey World League Final and Rio 2016 Olympic Games tickets continues in Antwerp.

Pool A
Japan 0-1 Korea
Korea grabbed a 1-0 win against Japan’s Cherry Blossoms as both teams played their final match in Pool A. The result proved to be enough for Korea to seal second place in the standings and set up a meeting with host nation Belgium.

The only goal of an incredibly close encounter between these two great rivals of Asian hockey arrived in the second quarter of the match, with team captain Kim Jongeun netting with a brilliant penalty corner drag-flick that sailed into the top right corner of Sakiyo Asano’s goal.

Regarding the meeting with the Red Panthers in the quarter-finals, Korea Head Coach Han Jin Soo was cautious. “I would not say that I am confident, because Belgium are good technically and they are the home team so will have a lot of spectators cheering, so if we do face them then we know it will be difficult.”

Netherlands 9-0 Italy
Reigning World, Olympic and Hockey World League champions the Netherlands made it four wins out of four in Antwerp, bringing Pool A to a close with a comfortable victory over Italy.

Team captain Maartje Paumen scored her second hat-trick of the tournament with Lidewij Welten (2), Caia van Maasakker, Ellen Hoog, Marloes Keetels and Carlien Dirkse van den Heuvel also on the score-sheet. It was a first defeat of the tournament for Italy, who battled bravely but were ultimately outclassed by the top ranked team in world hockey.

“I think we played a really good game, a nice, fast passing game and I think we did a really good job today to score nine goals against Italy”, said Maartje Paumen after the game. “We want to do better every time we stop onto the field and I am happy the performance today.”

Pool B
Belgium 0-2 New Zealand
New Zealand sealed a first place finish in Pool B courtesy of a 2-0 win over Belgium’s Red Panthers. Anita Punt and Gemma Flynn scored the goals for a Black Sticks team that finished the pool phase with a 100 per cent win record and a defence that has yet to concede a goal here in Antwerp.

“Full credit to Belgium, they came out firing so it was nice to get the second goal”, said Black Sticks striker Gemma Flynn, who has now scored seven times in four matches at the HWL Semi-Finals. “We had a few chances but it was pretty even throughout the game. We pride ourselves on our defence so it is really good to walk away from these pool games having kept a clean sheet.”

Looking ahead to their quarter-final match-up with Japan, Flynn said: “It will be a good challenge, so now our focus switches to preparing for that game.”

Australia 4-2 India
It was another fine day at the office for penalty corner superstar Jodie Kenny, who claimed a four goal haul as Australia’s Hockeyroos battled past a resilient India in the final match of Pool B.

The result sealed a second place finish for Australia in the pool, meaning that they will now face Italy - who finished third in Pool A - in the cross-over quarter-finals. India finished fourth in the pool and now face a tough quarter-final match against world number 1 the Netherlands, who finished at the summit of Pool A.

Speaking after the game, four goal heroine Jodie Kenny said: “There are things that we can improve for the next game but really happy to slot four on the board, which is a bit of deja vu from the first game”, referring to the four she netted against Poland on 21 June.

Looking ahead to their quarter-final clash with Italy, Kenny said: “First thing is recovery straight after the game and then the prep work, including research on the team.”