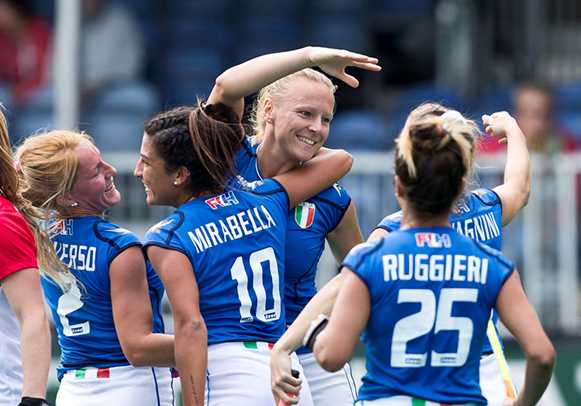 Day 4: Round 2 qualifiers Italy sealed their a place in the cross-over quarter-final phase of the FINTRO Hockey World League Semi-Finals thanks to a Pool B triumph over France. Meanwhile, in Pool A, India got their first points of the tournament with victory over Poland while Australia’s Hockeyroos moved onto six points with a hard fought win over host nation Belgium. More details about the exciting games from Wednesday can be found below.

Pool A
Italy 4-0 France
Italy defeated France 4-0 to secure their first win in women’s Pool A. The result puts the Italians - who won the HWL Round 2 event in Montevideo - onto four points, enough to guarantee their place in the cross-over quarter-finals.

Agata Wybieralska’s opened the scoring before Marcela Casale scored the goal of the game with a powerful backhand shot into the top right of the goal. Giuliana Ruggieri netted a third before Wybieralska grabbed her second and Italy’s fourth with a fierce penalty corner strike.

Following their win, Italy captain Chiara Tiddi said: “We felt good today. We had to win that game so we are happy with the result. Now we have to think about the game tomorrow because we know it will be an another important game against Japan, but we are feeling positive.”

Pool B
India 3-1 Poland
A 3-1 win against Poland women saw India claim their first victory in Pool B in Antwerp, Belgium.

A double strike from Rani gave India a 2-0 lead ahead of half time, but Poland pull a goal back in the fourth quarter with Natalia Wisniewska’s attempted pass taking a deflection off an Indian defender to reduce the deficit. However, India responded within minutes as Rani supplied Vandana Katariya for a tap-in to complete the scoring.

After the game, India’s double goal scorer Rani said: “This game was very important for us because we need to qualify for the quarter-finals and we lost our first two matches. Today we won because the whole team did well. We played better than the first two matches where we conceded a lot of goals and didn’t play attacking hockey. Today we played attacking hockey and we worked very hard as a team.”

Belgium 2-0 Australia
Australia women defeated hosts Belgium 2-0 on Wednesday evening in Pool B to pick up their second win of the competition.

Both teams started well in front of a packed venue at the home of KHC Dragons. However, the Hockeyroos silenced the home crowd quickly as Jodie Kenny hit the top right hand corner of the net with their first penalty corner after only nine minutes. Belgium gave their illustrious opponents a tough game, but a penalty stroke from Karri McMahon put the result beyond doubt.

This game saw Australia captain Madonna Blyth equal Nikki Hudson’s cap record for Australia as she represented her country at senior level for the 303rd time. Looking ahead to breaking that record against Trans-Tasman rivals New Zealand, Blyth said: “The next game will give me the chance to reflect on my career and all the opportunities I’ve been lucky enough to have. First and foremost it will be a really tough match for us and we will definitely want to improve on today – we’re going to have to be better against in-form New Zealand.”

More details about the competition including video clips, imagery and official tournament information can be found on the event website.