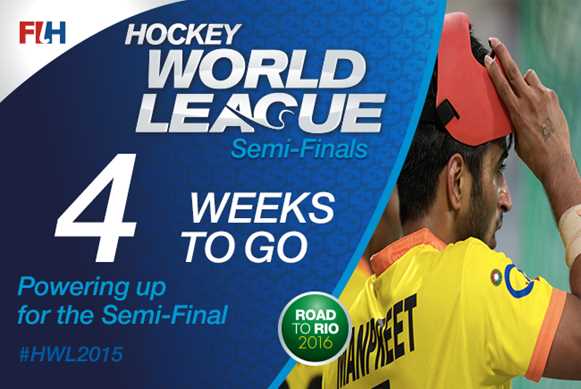 Powering up for the Semi-Final

India go into the Hockey World League Semi Finals as the only men’s team who can afford not to make the quarter finals in order to achieve its Olympic ambitions. But if anyone expects Paul van Ass and his men to sit on their laurels, then they must think again. India will be eyeing a top flight finish in Antwerp and the chance to play at the Hockey World League Finals in December as the team’s renaissance continues.

Although India has already qualified for Rio 2016 by virtue of a gold medal at the Asian Games, the team wants to continue the building and momentum that has been proven by its achievements in the past few months. A silver medal at the Commonwealth Games in Glasgow preceded the Asian Games gold medal.

While achieving a victory on the Asian continent was a great confidence boost for India, the team is still a long way from where it wants to be and, indeed, once was. During the 20th century, India along with fellow Asian giant Pakistan, was the world leader in hockey. Eight gold medals at the Olympic Games – still a record – and a World Cup – meant that India and its style of hockey was revered the world over.

Vasudevan Baskaran, who led India to its last gold medal in 1980, explained what had set Asian hockey, and India’s style in particular, apart from the rest: “Indian hockey has traditionally been characterised by individual flair, brilliant stick work and attacking mode of play.”

The Olympian went on to say that for India to regain its status as a top team, it must return to the free-flowing style of play for which it had become synonymous.

India’s coach, Paul van Ass, has a different view. He feels that patience and concentration are now the must-have qualities that are currently missing from his team’s playing style. “All round fitness of the team is good and the boys are showing excellent dedication, but yes, we will definitely be working on specific areas. The key is to have patience during the game as it helps in better control of the ball and the match,” said the Dutchman, in an interview with India’s online news station ZeeNews.

”What worries me is the defence,” he added. “The defence was a cause of concern for me even before I came to India. I think we lost a lot of games in the end phase during recent competitions.” Van Ass.

In the lead-up to the HWL Semi Finals, India played fellow Asian challengers Japan in a four match test series. Van Ass’s demands for patience seemed to be working as India wore down the Japanese defence and showed admirable concentration levels as the Japanese sought to play a fast moving, attacking style of hockey. India won the series 3-0, with one match drawn.