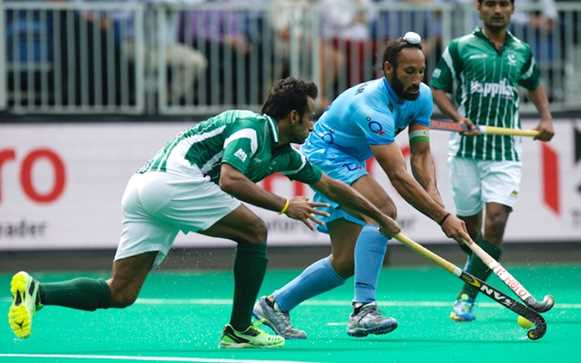 Day 6: It was a day of purely men’s action at the FINTRO Hockey World League Semi-Finals, which featured wins for Ireland and Belgium in Pool B while Australia maintained their hold on Pool A with victory over Poland. However, the big match of the day was unquestionably a thrilling Pool A clash between Pakistan and India, who gave the fans plenty of entertainment with a hugely enjoyable draw.

Pool B
Ireland 6-0 China
Alan Sothern scored a hat-trick as Ireland’s Green Machine secured their place in the quarter-final phase with a high quality Pool B victory over China in the first match of Day 6 in Antwerp. Sothern hit two goals in the 19th minute before completing his hat-trick three minutes after half time, with Peter Caruth, Ronan Gormley and Stephen Dowds also on target for the Europeans.

With a place in the cross-over quarter-finals now guaranteed, Ireland will now switch their attentions to their final Pool B match against host nation Belgium, which takes place on Sunday. The result of that contest could prove to be crucial as to where Ireland finish in the pool standings, which in turn will make a difference as to who they will face in the quarter-finals.

“The guys settled down and dominated some phases nicely”, said a satisfied Ireland Head Coach Craig Fulton after the game. “We know they like to play a high sweeper and going man for man at the back. It means they try and intercept high up the pitch so we had to be a bit more and patient and then try and move them about and it worked.”

Ireland goalkeeper David Harte, who was injured in an on-field collision and received treatment before being taken to hospital for assessment as a precautionary measure, has been released and is making a recovery.


Malaysia 0-2 Belgium
Belgium’s Red Lions moved to the summit of Pool B after winning their top of the table clash with Malaysia in front of a big crowd in Antwerp.

Belgium remain unbeaten in the pool with two wins and a draw from the three matches that they have played so far and very much have destiny in their own hands. Three points from this Sunday’s meeting with Ireland would guarantee a first place finish in Pool B, meaning that they would face the fourth ranked team in Pool A in the cross-over quarter-finals.

Following a cagey opening, Two exhilarating minutes in the third quarter sparked the game into life.  Dorian Thiery netted the first by following up a well saved strike from Amaury Keusters before Simon Gougnard volleyed home a second a minute later to complete the scoring.

“It was very difficult as Malaysia are in good shape in this tournament and they made life difficult in the first half, but we came back in the game and dominated after half time”, said Red Lions captain John-John Dohmen. “Now we want to finish the pool in first place.”


Pool A
Pakistan 2-2 India
India’s Ramandeep Singh and Greenshirts’ captain Muhammad Imran both bagged doubles in a classic Pakistan-India derby match that finished 2-2, giving both sides a share of the spoils in Antwerp. The result moved India onto seven points in Pool A with Pakistan up to four points, enough to guarantee a place in the cross-over quarter-finals.

"They are always exciting games for everyone”, said India captain Sardar Singh after the match. “Both teams played a good match, but it was lucky for us to get a draw.  A lot of Indian fans were looking forward to this game and I hope they enjoyed what they saw."

Pakistan captain Muhammad Imran said: "I'm very happy. Although it was a draw we played a very good game and we could have won it. It's a pool match and we are looking forward. We'll look at the mistakes we made in this match but in the end I am happy with the performance of my team."


Australia 4-0 Poland
Australia maintained their 100 per cent win record at the FINTRO Hockey World League Semi-Finals with a solid win over Poland, putting them top of Pool A at the end of Day 6.

The mighty Kookaburras are now certain of a top two finish in the pool, and need just a draw in Sunday’s match against India to seal first place and set up a quarter-final meeting with the team that finishes fourth in Pool B.

The opening goal arrived in the 10th minute when Kieran Govers smashed home a blistering strike following a blocked penalty corner flick from younger brother Blake. Whetton doubled the advantage after half time before Blake Govers and Simon Orchard completed the scoring. Poland were not without their chances though, and in goalkeeper Maciej Pacanowski they had arguably the star of the match thanks to an incredible 23 saves.

“They put the fight to us today and we knew that was what we were going to get because they had a really good game against Pakistan,” said Kookaburras star Jacob Whetton. “It was a tough fight but we ground it out in the end.”

Looking ahead to their Pool A decider against India, Whetton said: “It’s been a really good battle with them over the last twelve to eighteen months, and they have improved their hockey out of sight. We are really looking forward to what will be a big game ahead of the quarter-finals.”