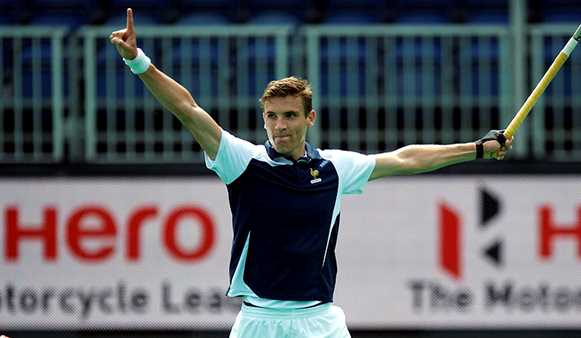 Day 4: France claimed their first points of the FINTRO Hockey World League Semi-Finals with a superb win over Pool A opponents Poland, giving them an excellent chance of reaching the quarter-final stage of the competition. Also in Pool A, Australia’s Kookaburras overcame stern resistance from Pakistan’s Greenshirts before coming out on top. More details can be found below.

Pool A
Poland 1-4 France
Two penalty corner drag-flicks from Victor Charlet enabled France to collect their first Pool A points at the FINTRO Hockey World League Semi-Final in Antwerp, seeing off Poland 4-1 to move within touching distance of a place in the event quarter-finals.

Les Bleues took the lead in the second quarter thanks to a penalty stroke from Hugo Genestet, who sent a low effort past into the bottom right corner of Meciej Pacanowski’s goal.

France made it 2-0 in the third quarter through Charlet before clever work from Krystian Makowski created a simple tap in for Maciej Wejezowski to reduce the deficit ahead of the fourth quarter.

Poland came within inches of levelling the scores early in the fourth quarter when Tomasz Gorny hit the crossbar, but a yellow card awarded to Arkadiusz Brozek proved to be costly for the Poles with Jean-Laurent Kieffer and Charlet killing the game off with late strikes.

“It is very exciting for us because we know that we can do very well in this tournament, so it is good to take a step closer to the quarter finals”, said two goal hero Victor Charlet after the match. “Now we will focus on our next match against Pakistan, and we want to beat them. After what we showed against India, I think we are capable of it.”

Pakistan 1-6 Australia
Australia emerged triumphant in the final match of the day, overcoming stern resistance from Pakistan to run out 6-1 winners. The result puts the mighty Kookaburras onto six points in the Pool, drawing alongside India and moving three clear of the famous Greenshirts.

As expected, the match was packed full of action and incredible skills, with Pakistan giving the world number 1 ranked team a real run for their money in the opening two quarters.

The Australians took the lead when Jacob Whetton finished off brilliant team move in the 9th minute, but five minutes later Pakistan restored parity thanks to a Muhammad Irfan penalty corner.

It was no more than the Greenshirts deserved, but the Australians stepped up their game considerably in the third quarter to establish a 3-1 lead thanks to Daniel Beale and Matthew Swann.

Legendary attacker Jamie Dwyer made the score 4-1 in the fourth quarter, with teenage sensation Blake Govers scoring Australia’s fifth and sixth goals with a penalty corner double. "They played well earlier in the year so we knew it was going to be a fight, but it was nice to grind it away and get some goals in the second half”, said Kookaburras captain Mark Knowles after the match.

It was also a special day for Indian umpire Raghu Prasad, who took charge of his 100th senior international and was subsequently awarded his Golden Whistle the game.

More details about the competition including video clips, imagery and official tournament information can be found on the event website.