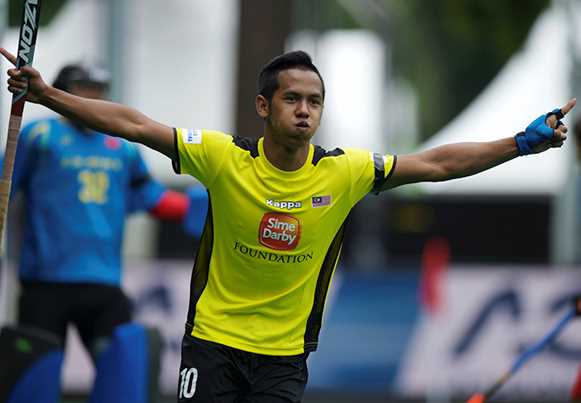 On day 2 of the men’s competition at the FINTRO Hockey World League Semi-Finals, 31st ranked China fell to a narrow defeat against Malaysia while Belgium’s Red Lions and Great Britain played out an entertaining draw in front of massive crowd in Pool B. In Pool A, Australia’s Kookaburras sent out a warning to all opponents in Antwerp that they are in sensational form with a big victory over France. More details about the matches can be found below.

Pool B
China 2-3 Malaysia
World number 12 Malaysia overcame a strong challenge from 31 ranked China to emerge 3-2 winners as both nations opened their Pool B campaigns in Antwerp.

Two second quarter goals gave Malaysia a firm grip on the contest, with a Faizal Saari rocket finding the roof of the net before Muhammad Shamsul added a second on the stroke of half time. Guo Xiaoping pulled a goal back for China but Malaysia’s Razie Rahim restored the two goal advantage. Again, China came back with a Zhang Zhixuan strike setting up a fascinating final few minutes, but Malaysia kept their Asian rivals at bay.

“We were nervous in the game as it is a really big tournament”, said China captain Sun Tianjun. “We didn’t play our best, but we know that we can do better in the coming matches.”

The players of both teams were wearing black armbands in respect to goalkeeper S Kumar, who recently returned home to Malaysia following the tragic death of his son.

Great Britain 2-2 Belgium
The fans turned out in their thousands to watch Belgium’s Red Lions open their FINTRO Hockey World League Semi-Finals account with a 2-2 draw against Pool B rivals Great Britain. The match was a milestone for Belgium’s Felix Denayer, who was playing his 200th senior international.

A brilliantly angled deflection from team captain John-John Dohmen put Belgium ahead before GB’s own captain Barry Middleton finished off a second phase penalty corner to level the scores. A terrific solo goal from Alastair Brogdon quietened down the home supporters in the third quarter, but they were back on their feet cheering when Sebastien Dockier completed the match scoring with a penalty corner follow-up.

“They are a good side, but I think we’ll feel a frustrated that we didn’t play better”, said Great Britain’s Dan Fox after the match. “Playing the hosts in the first match is the best way to start, really, as it gets you right into the tournament and it is great playing here in Belgium.”

Pool A
Australia 10-0 France
Reigning world champions Australia sent out a clear statement of intent in their first match of the competition, surging to a 10-0 triumph over Pool A opponents France. Striker siblings Kieran and Blake Govers both scored twice in the rout, with Chris Ciriello, Jamie Dwyer, Matt Gohdes, Simon Orchard, Jacob Whetton and Eddie Ockenden also contributing.

The pick of the goals came from Gohdes, who started and finished a slick passing move with an audacious chip that sailed over the head of onrushing goalkeeper Martin Zylbermann and just under the crossbar.

It was a typically impressive display from Australia and was the perfect way to mark one of their player milestones, with Fergus Kavanagh enjoying that familiar winning feeling on the occasion of his 200th international appearance.

Australia’s Matthew Swann was upbeat about his teams display, saying: “It was a really great way to start. We felt that we’d put in a lot of hard training sessions and I think physically we are very well prepared for the tournament.”

Just as Australia’s women did earlier in the day, the Kookaburras wore black armbands as a mark of respect for Jackson Tudhope, a talented young hockey player from South Australia who tragically lost his life in a car accident last week.