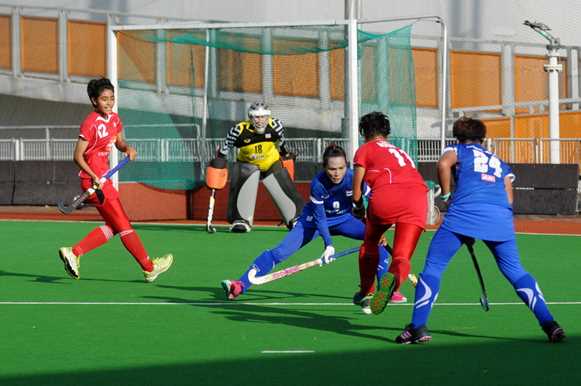 As six teams battle it out in the heat of Singapore, we look at the new nations breaking onto the global stage

Vera Domashneva is not a household name in hockey circles, but she could soon be. The 29-year-old from Kazakhstan is the leading goalscorer for her country in the current Hockey World League Round One competition taking place in Singapore. An opening goal against Thailand was followed by a hat-trick in Kazakhstan's 9-0 win against Hong Kong. The central Asian country, which is ranked 33rd in the FIH World Rankings, now has a final against free-scoring Malaysia to decide who will be crowned Round One champions and progress to Round Two.

Malaysia women, are some way behind their men in terms of hockey development, but their progress in this tournament suggests that they are seriously eyeing up the hockey big time. A 14-0 win against Sri Lanka, a 10-0 win over Singapore and a 8-0 win over Thailand means the Malaysia side could soon move up the FIH World Rankings, currently they are ranked 22nd.

The Hockey World League is providing the backdrop for fairytale stories of success; David and Goliath encounters and, most importantly, the chance for nations to break onto the global hockey stage and make their mark in dramatic fashion. The number of teams who qualify to go through to Round Two varies from depending upon the number of teams playing in the Round One competition, but for this edition, three or four teams from Singapore will qualify for Round Two, to be held later this year.

In Singapore this week, six nations have been battling it out to win through to Round Two of the Hockey World League, taking the first steps on a journey that could potentially lead to Rio de Janeiro in just under two years time. The women's teams of Singapore, Hong Kong, Kazakhstan, Malaysia, Sri Lanka and Thailand do not contain house-hold names that trip off the tongue, but they do have squads of players who are passionate about their sport and determined to represent their country on the international hockey stage. It is possible for a team to progress through the rounds and qualify for a place at the 2016 Olympics.

The Hockey World League is in its second cycle, and the concept behind the idea is already bearing fruit. There is an undoubted top tier of hockey playing nations, with recent World Cup winners Australia men and the Netherlands women topping that particular chart, but the Hockey World League provides the building blocks for teams of the future, and already we are seeing the world order of international hockey shifting – Argentina men who came from 11th place in the FIH World Rankings to gain a bronze medal at the Rabobank Hockey World Cup are testimony to that.

The second women's Round One competition is taking place in Lithuania from 26-29 June. Here nations from eastern and central Europe will do battle to win through to Round Two, with Poland, Belarus, Ukraine and the host nation playing a round robin to decide which teams will take one step closer to reaching hockey's higher echelons.