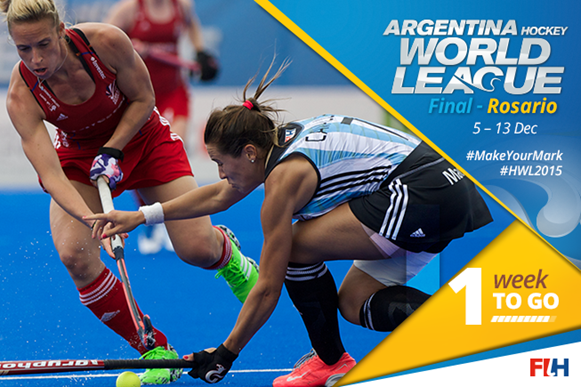 The eight best women's teams in the world are about to descend upon Rosario for the Argentina Hockey World League Final 2015, taking place at the Estadio Mundialista de hockey between 5-13 December.

Teams taking part in this event will be aiming to take the showcase Hockey World League title and in doing so guarantee qulaification for next year's Champions Trophy in London, England.

With vital International Hockey Federation (FIH) World Ranking points also on the line, there's a lot to play for in Argentina.

The road to Rosario has been a long one, starting with the Round 1 events back in 2014 and culminating in Argentina’s third largest city.

Ranked third in the world, Argentina will be disappointed with their performance in the Hockey World League Semi-Final in Valencia, Spain earlier this year where they lost in the bronze medal match to Germany.

This will be seen as a chance to re-establish themselves as one of the dominant forces in world hockey – particularly as they can be assured of huge home support. For the likes of Carla Rebecchi, Delfina Merino and Florencia Habif, they will be looking to make their mark on this competition.

Reigning Olympic and world champions Netherlands, ranked number one in the world, are, of course, the team to beat, whatever the competition.

England managed to defeat them in the EuroHockey Finals, but be very certain that new head coach Alyson Annan will be looking for her charges to show what they are capable of.

Australia (World Ranking: 2) are a team that are getting better with every outing. Head Coach Adam Commens has been in position long enough to instil his philosophy on the team and with players such as powerhouse Jodie Kenny, the inspirational leader Madonna Blyth and stalwarts Georgia Nanscawen and Emily Smith never giving less than 100 percent, this is a team that has a strong base to build from.

In the Hockey World League Semi-Final in Valencia, China (World Ranking: 5) showed their tactical nous with a steady improvement in performance as the tournament unfolded.

One team that is on its way back is Great Britain, now ranked sixth in the world.

Playing as England, they swept to victory in the EuroHockey Finals – beating the Dutch in shoot-out.

Prior to that, the Great Britain team had sealed first place in the Valencia Hockey World League Semi-Final.

The return of Crista Cullen to the line-up for the first time since 2012 is a move that will be viewed with great interest by the opposition.

This could also be the tournament that sees Kate Richardson-Walsh overtake Karen Brown as the most capped England/Great Britain female player.

Germany (World Ranking: 9) are a team that could cause a few upsets in Rosario. In Charlotte Stapenhorst, Die Danas has a star in the making.

Kristina Hillmann and Lisa Altenburg are always goal hungry; and in Yvonne Frank and Kristina Reynolds, Head Coach Jamilon Mulders is spoilt for choice when it comes to goalkeepers.

A bronze medal at the EuroHockey Finals earlier this year will have boosted this group of players' confidence.

New Zealand’s Black Sticks come to Rosario hoping to end the year on a high. The world's fourth ranked team finished out of the medals in the Hockey World League Semi-Final, finishing fourth in Antwerp, Belgium and then lost to Australia in the Oceania Cup.

Mark Hager will be hoping the experience of Anita Punt, Emily Naylor and Gemma Flynn will see the Black Sticks through to the final stages at this showcase event.

Korea (World Ranking: 8) is the eighth team that will star in Rosario. They were the first team to qualify for the Rio 2016 Olympics courtesy of the Asia Games.

The silver medallists at the FINTRO Hockey World League Semi-Finals in Antwerp are a team that combines skill and a well-organised structure.

With strikers of the quality of Kim Darae and Park Mihyun, Korea must be in with a shout of a podium finish.

Keep up to date with all the latest action from Rosario on FIH.ch and through FIH social media channels.

Format
The event features two pools of four followed by quarter-finals, semi-finals, classification and medal matches. Following the round robin, the top four teams in each pool will move into the crossover quarter-final phase, with the pool winners meeting the fourth-placed team from the opposite pool. The #2 and #3 finishers will also face-off in the knock-out quarter-final. The winners of the quarter-final matches will move into semi-finals and the medal games, with the losing teams playing for placement.

Following the tournament
FIH.ch
We will be providing full coverage of the event via the FIH website including reports, news stories, event imagery and much more.

Live Streaming
For regions where broadcaster partners own the rights, please check with them to view their live streaming provision (for broadcast partners, see above).

YouTube
The FIH YouTube channel will be extremely active during the event, with match highlights and much more being posted as soon as they become available.

In countries that do not have TV broadcast agreements in place, you may watch the games via FIH's YouTube channel: http://www.youtube.com/fihockey