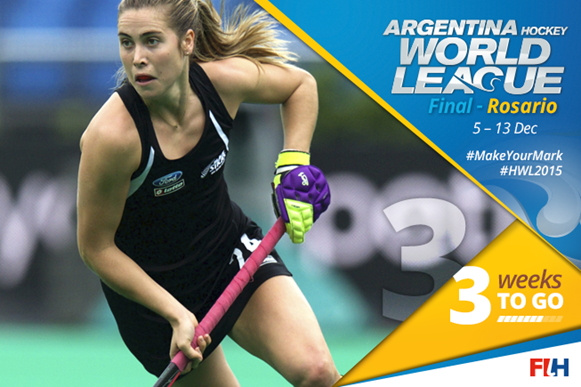 Under the guidance of Head Coach and former Australian international Mark Hager, New Zealand’s Black Sticks (FIH World Ranking: 4) have enjoyed arguably the most successful period in their history.

In 2011, the team claimed their first ever Champions Trophy medal when they took third place at the tournament in Amsterdam, and a year later narrowly missed out on an Olympic medal when they were beaten by Great Britain in the fight for bronze.

Following a difficult 2013, the team achieved a hugely creditable fifth place finish at the Rabobank Hockey World Cup before claiming fourth place at the end of year Argentina Hockey Champions Trophy. This year, a fourth place finish at the FINTRO HWL Semi-Final and a silver medal at the Oceania Cup were slightly below expectations, but you can be sure that they will be a force to be reckoned with in Rosario.

Hager has announced a strong side for the Argentina Hockey World League Final with nine players having over 100 caps, three of which have surpassed the 200 international appearances marker - Emily Naylor (250+), Anita Punt (210+) and Gemma Flynn (210+).

Punt and Flynn provide speed and goals, while New Zealand’s most capped player Naylor (257 caps at the time of writing) brings a hard-nosed approach to the defensive line.

21-year-old goalkeeper Georgia Barnett has received the call-up and will be looking to stamp her mark ahead of Rio Olympic selection at the end of this year. Fellow goalkeeper Amelia Gibson has been ruled out with injury while former captain Kayla Whitelock and striker Katie Glynn are building up their fitness and are on track to return to action later this year.

Key player: Anita Punt. With well over 200 international appearances to her name, lightning fast attacker Anita Punt is New Zealand’s all-time top scorer and one of the most experienced members of the Black Sticks line-up. Her frightening turn of pace has been terrorizing defenders for years, and is also a regular scorer from penalty corner situations thanks to her impressive drag-flicking skills.

Coach quote – Mark Hager: “We are very pleased with the team named, you only have to look at those unlucky players that have missed out to get a sense of the depth and high calibre of players in our wider group at the moment. Having the team here [in Auckland] has allowed us to work on our set pieces and structures, rather than having to work on those critical aspects of the game when we are away. Goal scoring is the key focus for us at the moment, we know we get the chances throughout a game and it’s just practicing how we convert those.”