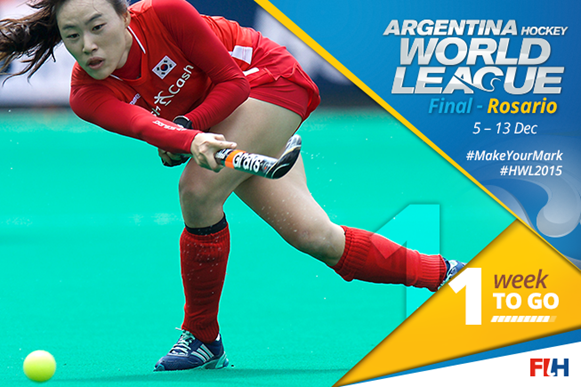 Korea (FIH World Ranking: 8) are known for being one of the most well-organised international sides in world hockey, and on their day are capable of giving any team a run for their money. They were in excellent form at the FINTRO Hockey World League Semi-Final in Antwerp, Belgium earlier this year, finishing in second place behind reigning World and Olympic champions Netherlands, who needed a late strike from 2014 FIH Player of the Year Ellen Hoog seal the win.

Despite the defeat, the Korean players went away from the competition feeling justifiably proud of their performances and know that if they can perform at the same level at the Argentina Hockey World League Final in Rosario, they could be in with a chance of taking the title.

Following a difficult 2013 - the side were defeated in the final of the Asia Cup by Japan before recording a dismal eighth place finish at the Argentina Hockey World League Final in Tucuman.

Korea started 2014 in disarray but ended the year in high spirits. Their shock fifth place finish at the Champions Challenge 1 event in Glasgow early in 2014 was a massive low for the proud Koreans, arriving at the event as tournament favourites but failing to secure a place on the podium.

A creditable seventh place finish at the 2014 Rabobank Hockey World Cup proved to be both a turning point and ideal preparation for the 2014 Asian Games on home soil in Incheon. It turned out to be a fantastic tournament for the hosts, defeating China in the competition final to claim  a ticket to the Rio 2016 Olympics.

Although the Korea squad for Rosario had not been confirmed at the time of writing, Head Coach Han Jin Soo is expected to take a strong team to Argentina as they build towards Rio. Feared striker Park Mihyun and ace midfielder Kim Jongeun, the team captain, are usually the first names on the team-sheet and are massively influential figures both on and off the field, as is regular scorer Kim Darae.

Goalkeeper Jang Soo Ji is another player to keep an eye on, having earned a reputation as a terrific shot-stopper who is something of an expert when it comes to shoot-outs. Jang conceded just two goals in two shoot-out competitions at the HWL Semi-Final in Antwerp, making crucial saves as her team defeated Belgium and New Zealand on route to the final.

Key player: Park Mihyun. A live-wire striker with an extraordinary ability to create chances out of nothing. The 29-year-old attacker has played over 200 times for her country and was named on the ten-strong shortlist for the 2013 FIH Player of the Year Award.