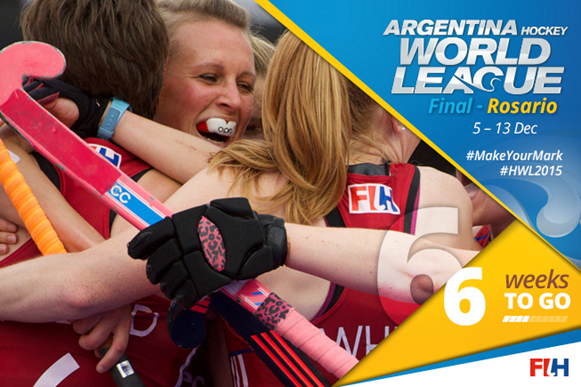 Following their bronze medal at the London 2012 Olympic Games, Great Britain (FIH World Ranking based on England: 6) will be aiming even higher at Rio 2016 and certainly have the players capable of competing with the very best in the world.

They were in excellent form at the Valencia Hockey World League (HWL) Semi-Final where they qualified for the Rio 2016 Olympic Games, defeating China in the competition final.

The vast majority of the Valencia squad went on to represent England at August’s Unibet EuroHockey Championships in London, where they continued their fine form by taking the title thanks to the goalkeeping heroics of Maddie Hinch, whose brilliance in the shoot-out helped her team overcome world number one ranked Netherlands in the event final.

The recent return to winning ways came after a relatively rough period for the England & Great Britain camp.

GB dropped down the FIH World Rankings as a result of England’s dismal 11th place finish at the Rabobank Hockey World Cup 2014, having entered the event ranked number three in the world.

Shortly after the end of that event, England Head Coach Jason Lee made the decision to step away from  the squad and was replaced on an interim basis by Danny Kerry, the team’s former Head Coach and current Performance Director for England & Great Britain Hockey.

Kerry’s impact was immediate, guiding the England team to a Silver medal at the Commonwealth Games in Glasgow, Scotland before achieving a fifth place finish at the Argentina Hockey Champions Trophy at the end of the year.

Since then, Kerry has been confirmed as the Head Coach for the England and Great Britain Women’s Hockey programme through to the Rio 2016 Olympic Games, and will be determined to see his team maximize their potential over the next 12 months.

Key player: Alex Danson. One of the most feared strikers in the game, Danson is a defender’s nightmare: quick, skillful and absolutely lethal in front of goal. Named on the shortlist for the FIH Player of the Year for 2013.

Additional information: As well as the respective talents of ace shot-stopper Hinch and the ever-dangerous Danson, there are plenty of other top quality internationals currently representing Great Britain. 2013 FIH Young Player of the Year nominee Lily Owsley is another player well worth keeping an eye on thanks to her speed and incredible skills, while veteran stars Kate and Helen Richardson-Walsh bring masses of world level to the fold.