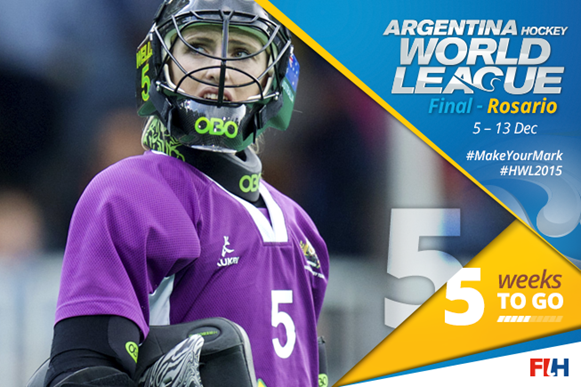 Between 1994 and 2000, Australia (FIH World Ranking: 2) were by far and away the best team on the planet, claiming two Olympic Gold medals and two World Cups as the team coached by Ric Charlesworth ruled the hockey world.

Many years have passed since that time, but the momentum that the current group is gathering under Head Coach Adam Commens suggests that a new period of dominance may well be on the horizon.

Following their fifth place finish at the London 2012 Olympic Games, Australia’s young guns have hit some seriously impressive form. Early signs of progress were seen in September 2012 when the team claimed the FIH Champions Challenge 1, a success which was quickly followed in 2013 by first place finishes at the Hockey World League Semi-Final (London) and Oceania Cup Continental Championship before claiming the silver medal at the Argentina Hockey World League Final in San Miguel de Tucumán later that year.

They took their sensational form into the Rabobank Hockey World Cup, where they finished as silver medallists behind host nation and world number 1 Netherlands.

Since then, the team has won a gold medal at the Commonwealth Games (Glasgow, Scotland), silver at the 2014 Argentina Champions Trophy and confirmed their place at the Rio 2016 Olympic Games by taking third place at the FINTRO Hockey World League Semi-Final in Antwerp.

Their last competition before the Hockey World League Final saw them successfully defend their Oceania Cup title against hosts New Zealand in Stratford in October.

There is little doubt that this current Australia team is once again a major force in world hockey and is more than capable of claiming the Hockey World League title in Rosario.

Key player: Madonna Blyth. Australia’s team captain  and star midfielder recently became the most capped Australian women of all time, overtaking Nikki Hudson’s 303-game record at the FINTRO Hockey World League Semi-Final in Antwerp earlier this year. Since making her senior international debut in 2004, the 29-year-old has represented her country at two Olympics, earning a reputation as a fearless player who thrives on the big occasion.

Additional information: Although Blyth is an inspirational figure, there are plenty of others who could make a big impact should they be selected for the event in Rosario. Defender and penalty corner expert Jodie Kenny finished as competition top goal-scorer at the HWL Semi-Final event in Antwerp with ten goals, while fellow defender Anna Flanagan – FIH’s Young Player of the Year in 2012 – is also capable of making her mark on the scoreboard at set plays.

Hockey Australia is working hard to ensure that the sport continues to grow throughout the country, aiming to increase the number of registered participants from 125,000 to 250,000 by 2018. As well as this, Hockey Australia’s strategic plan for 2014-2018 plans to drive up commercial revenue by 50%, set the highest standard of governance across all of Australian sport, and for the Australian national teams to achieve consistent performance and success at 14 benchmark events.