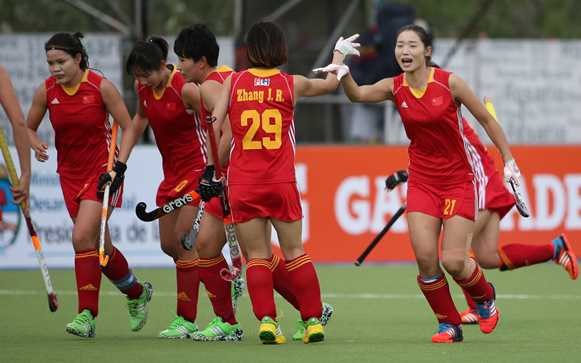 Pool B throws up surprises, while rain delays conclusion of Pool A

China's strategy of defending deep and hitting their opponents on the counter attack paid dividends as they beat the host nation 3-1 – a result that pushed Argentina from second in the pool to fourth.

All three Chinese goals were spectacular shots, Wang Mengyu with a rasping penalty corner; Zhao Yudiao with a shot from the top of the circle and Yu Qian hitting from the left across Belen Succi to score deep in the right-hand corner.

While the goal scorers got the plaudits, it was goalkeeper Li Dongxiao whose brilliant and brave defending maintained her team's lead. The result means Argentina will take on the Netherlands, but China will not know their opposition until the final two pool matches are completed.

In the earlier match between Australia and Great Britain, Helen Richardson-Walsh was once more the woman of the hour for Great Britain as she scored the only goal in a highly paced game against the world number two side Australia.

This was a match that Great Britain needed to win to avoid the ignominy of finishing the pool stages in fourth place. Australia were playing to maintain their 100 per cent record.

Edwina Bone, who played a sterling game in defence admitted they had found the going tough. "It was very hard out there, we had to run a lot. Of course we are a little disappointed but you win some you lose some."

The game began well for the Hockeyroos: they were faster to the ball and their high press kept the Great Britain team contained for the first period of play. When they attacked, Georgia Nanscawen and Emily Smith always looked a potent strike force.

The momentum in the game changed as Crista Cullen, making her first appearance at a major event since the 2012 Olympics, and captain Kate Richardson-Walsh laid a solid defensive base. From here, Great Britain were able to attack with confidence but, just as the Great Britain defence was holding strong, so too was the Hockeyroo unit of Jodie Kenny and Kirsten Dwyer and despite their best efforts Alex Danson and her fellow forwards were unable to make a breakthrough.

When the goal did come, it was from an experienced campaigner. Helen Richardson-Walsh got on the end of a rebounded shot from an Alex Danson strike and the midfielder had no hesitation in slamming the ball home.

Speaking after the game, Helen Richardson-Walsh said: "I think we played really well. We filled all the gaps, we didn't rush the ball. It was pretty hot and we made a few little mistakes which we want to tidy up before the quarterfinals."

A torrential downpour in Rosario put paid to any play for the remainder of the day. This means the the final two games of the pool stages were rescheduled for Wednesday. Heavy rain means the pool A matches between New Zealand versus Germany and Korea versus Netherlands will now be played on Wednesday, when the final three quarter-final matches will be decided.