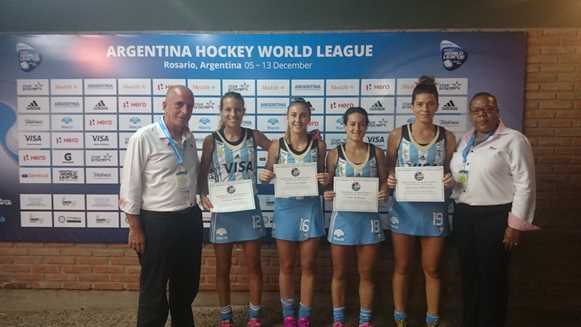 Four players who are competing in the Argentina Hockey World League Finals in Rosario have been named as part of the Pan American Hockey Federation (PAHF) elite team.

Argentina stars Florencia Habif, Delfina Merino, Agustina Albertarrio and Pilar Romang were all named as part of the 16-strong Pan-American elite squad and they were presented their certificates of recognition by PAHF president Alberto 'Coco' Budeski.

Dominating this year's squad list are the USA and Las Leonas, each team has four players apiece voted in, with three players from Canada, two from Chile and one apiece from Brazil and Uruguay.

Speaking after the presentation Florencia Habif said: "To be named part of the 2015 PAHF Elite Team is a huge honour. For us, to be appreciated in this way means we are doing things right, the hard work we do every day, we play with passion. We want to thank the rest of our team because we couldn't play as we do without them."

Pilar Romang added: "It also represents a challenge, to be always on the top of our game as elite players and to keep evolving. We also have a responsibility as part of an elite team to be a role model to hockey fans around the world."