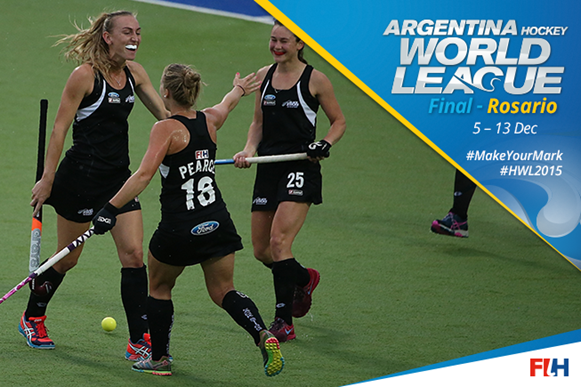 New Zealand have finally shrugged off the mantle of fourth-placed team after a determined and battling 2-1 performance against Germany.

True to their form all tournament, Germany threatened to come back in the latter stages of the game, but New Zealand displayed their increasing maturity in these situations to hold a 2-1 lead and withstand the intensity of the German attack on their goal.

In the first semi-final of the Argentina Hockey World League Final, Germany began brightly. They forced the first penalty corner and Julia Muller's eventual strike served as a warning that the team that finished bottom of their pool but then beat the world number two side Australia in the quarter-final meant business.

As one of the most physically fit teams in the competition, New Zealand sought to create space for their forwards to run to. This tactic worked as the field spread out and New Zealand played the ball around the pitch and picked holes in the German defence. Janne Muller-Weiland made a rare defensive error which was punished when Stacey Michelesen intercepted a cross field pass and left Kirsten Pearce with a clear goal scoring chance. Pearce (9') made no mistake and New Zealand took the lead.

Germany took the initiative back as they forced their second penalty corner. But the shot went wide and Pippa Hayward set up a quick counter attack. Anita Punt received the ball and chipped Yvonne Frank in the German goal only to see Gemma Flynn knock the ball over the German goal. Frank and her team breathed a collective sigh of relief.

The second quarter saw both teams settle into their own style of play. For New Zealand this was quick passes that sought to get players behind the German defence: the German team by contrast played quick, passing game that gradually worked the ball up the field. what was similar about both teams' style of play was the intense physicality with which each team went into every challenge.

New Zealand were awarded their first penalty corner in the 23rd minute and Brooke Neal's shot was cleared by the German defence. A second penalty corner was awarded and this time Liz Thompson (25') made no mistake as she dragged the ball into the back of the goal. Gemma Flynn and Charotte Harrison almost combined to make it three when Flynn played a ball across the German circle but Harrison, who came at top speed into the path of the ball was unable to control her deflection. A typically direct run from Punt won New Zealand their fourth penalty corner, but Frank was down quickly to make the save. The second half saw nervous starts from each team.

Mistakes in defence, balls cleared uncertainly and loose passes meant that neither team really got a hold on the game. Germany were the first to create a clear scoring opportunity. A lovely ball into the circle found Marie Mavers, whose delicate little touch brought out a top save from Sally Rutherford in the New Zealand goal. The resulting penalty corner saw Eileen Hoffman (36') pick up on the rebounded shot and flick it over Rutherford to halve the lead.

Lydia Haase nearly made it all square when she managed to get on the end of a cracking pass and put it over the New Zealand goal.

The momentum changed as the half counted down, with New Zealand pressing high up the pitch and the German team had to stifle their attacking instincts and sit back to weather the Black Sticks storm. As the match reached the final quarter the question was whether New Zealand could hold their narrow lead or would the German team be able to turn their confidence in their ability to battle back in these circumstances to drive themselves to score more goals.

As the game counted down, there was a sense of increasing urgency in the German ranks. Julia Muller left the pitch for a crude tackle and New Zealand sought to calm things down with some precise passing and possession.

New Zealand's chance to put the game out of reach fell to Petrea Webster. The forward was found by Flynn after the midfielder robbed the German defence of possession. Webster's shot flew high over Franks and the cross bar. With two minutes left, Germany threw everything at the game, including removing their 'keeper with two minutes left. Mavers was unlucky to see her deflected shot fly high over the goal and this was Germany's last meaningful attack.

New Zealand will now play either Argentina or China for the gold medal.

"We don't really mind who we play in the final," said Stacey Michelesen after the game. "Argentina will have all the crowd behind them, but we haven't played China in a awhile – either will be tough."

And Sally Rutherford admitted the thought that Germany might force the game to shoot-out had crept into the team's minds as the match neared the end. "But, the biggest thing for us was to make the final. The last three major tournaments we have played in, we have finished fourth, so it is nice to get over that hurdle."

In the fifth place match between Australia and the Netherlands, it was a sole goal from Lidewij Welten that separated the teams. The midfielder was the beneficiary of a super, mazy run by Eva de Goede, and Welten was able to shoot home with accuracy and conviction.

Great Britain made certain of seventh place when they scored five past Korea. Nicola White opened and finished the scoring, with Ellie Watton, Helen Richardson-Walsh and Hannah MacLeod all finding the net. Han Hye Lyoung scored a consolation goal for Korea.