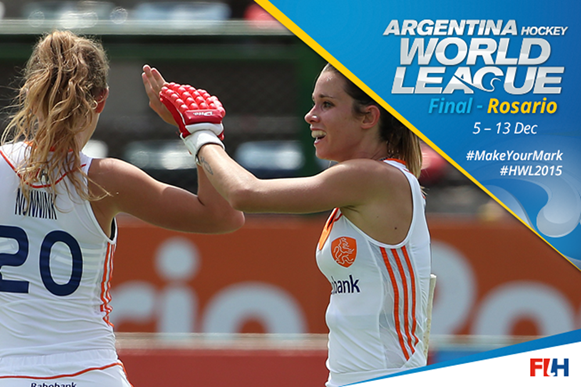 The line-up for the quarter-finals at the Argentina Hockey World League Final have been decided after the final two Pool A matches were played.

The Netherlands strolled to a 5-2 victory against Korea, while New Zealand made the better use of their chances in an even match against Germany, which the Black Sticks won 3-1.

The results mean that Netherlands will play Argentina in a mouth-watering encounter between the world number one and the world number three sides. While the Netherlands have made serene progress through the pool stages, Argentina have been playing hockey that ranges from magical and mesmerising to torturous and unconvincing.

The 3-1 result against Germany means that New Zealand finished second in Pool A and have a tough encounter against Great Britain to look forward to. Both sides know each other well and, with two canny coaches in Mark Hager and Danny Kerry, this could be a cagey fixture that goes to the wire.

New Zealand captain Anita Punt said, "We have been trying some different things, so we'll see. It is time we had a medal round our necks, rather than always finishing fourth."

The first match on quarter-final day will be an all-Asian encounter. While Korea were the first team to qualify for the Olympics, at the expense of China, it is the Chinese team who has looked the sharper at this event. Both teams play similar styles of hockey: a solid defence and a quick counter-attack.

Germany will face Australia in the other quarter-final. While the Hockeyroos finished top of their group, they did suffer a loss at the hands of Great Britain. Germany, by contrast, have yet to win a game at this competition, but conversely, according to Janne Muller-Weiland, they are getting more confident with each game.

"We started very badly," said the German defender. "But each performance has got better. Today (against New Zealand) we just didn't put our chances away. And, we are German. We like quarter-finals."

In today's matches, Netherlands opened the scoring through Lidewij Welten. Korea fought back immediately as Cheon Eun Bi scored possibly the cheekiest goal of the tournament when she turned in front of Netherlands 'keeper Joyce Sombroek and slipped the ball backwards through her legs into the empty Netherlands goal.

The Netherlands reclaimed their lead in the 16th minute when Caia van Maasakker converted a penalty stroke and Ellen Hoog extended the lead a few minutes later. Park Seung kept her team in the game when she deflected a penalty corner strike.

Kelly Jonker scored just after half-time, making her leading goalscorer at this stage of the competition, and the final Dutch goal came from Marloes Keetels.

Speaking after the game, Han Hye Lyoung, who won her 150th cap for Korea, said: "We had a good first half, but as soon as the Netherlands scored their second, the players let their heads go down. We must learn how to cope with disappointment."

The second match was a hard-fought encounter between two physical sides. Neither New Zealand or Germany give an inch when they play and in the heat of the Rosario sun, this was a tough and competitive game.

While New Zealand emerged as 3-1 winners, Germany will feel they could have taken the match as they created several chances themselves.

In response, Germany scored through Franzisca Hauke, but Julia Muller and Pia-Sophie Oldhafer were both unlucky to see their shots fly wide of Sally Rutherford's goal.

The times and line-up for the quarter-finals are as follows:

All times are local times.