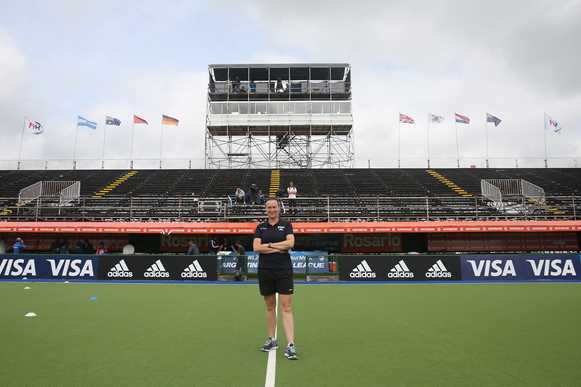 Life from a different angle

Lisa Roach is renowned as an international umpire. The Australian has umpired at two Olympics and two World Cups and she will be packing her bag for Rio 2016 next year.

But Lisa, or Roachie as she is universally known, will not be tearing up and down the pitch blowing her whistle in Rio, rather she will be watching events from the relative comfort of the video umpire's office.

This is not through choice Lisa is quick to point out. For her the real excitement in the game lies in the action on the pitch. "I would definitely have preferred not to stop. It is a huge transition out of umpiring, it is taking something out of your life that has been hugely important for so long. As a player these days you get help and support when you stop playing, and I think as umpires we need something similar."

But, with a few competitions as video umpire under her belt now, Lisa is realising that she can play her part in developing and supporting umpires as they come through the ranks and, while it is not the on-pitch role that she has played for so many years, it is still a vitally important role within the umpiring team.

"Prior to the game I talk to the umpires," she says. "I like to get them feeling that they can trust me. It can be a lonely place out on the pitch, so knowing there is someone on your side is a good thing. I also talk to the umpires at quarter-time and half-time, just pointing out some of the good decisions they have made or highlighting a situation where they really dealt with it well. As video umpires we can help the umpire on the pitch feel calm and focussed."

The role of video umpire has developed in the past few years and Lisa says that it is an essential part of the increasing professionalism of the game. Not only does it ensure the game is played to the highest standard of decision-making but, as video umpire, Lisa is able to offer insight into rules and situations that the umpires on the pitch might face.

"We see a different angle and we have time and resources to look back at situations. That is invaluable when it comes to the post-match debrief."

As video umpire, Lisa and her colleagues face the challenge of making decisions based purely on what they see. "There is no room for what we 'thought' we have seen. This is where people sometimes ask questions. We cannot give a decision unless we actually see the action. So it might look like it has hit a foot by the direction of travel, but if the replays do not show that, then we cannot make that call."

The FIH has been pursuing a policy of drawing more young umpires into the game and Lisa says the mixture of young, new entrants and some of the more experienced umpires is helping develop the standard across the board.

"You see people come to these tournaments and they are a bit unsure and nervous. But by the end of the event they are far more confident and have almost 'grown up' a little bit more. That is the beauty of international events, you learn new life skills, you meet people from all cultures and you learn a bit more about yourself as well."

Lisa has always been quick to help her colleagues and she sees her new role as an opportunity to continue down that road. "I'm not sure at this stage if I want to go into umpire management, I'd like to give it a few years as video umpire before I make that decision, but I have always been someone who wants to get the best out of my colleagues – I think in doing that, I get the best out of myself as well. In the video umpire box I can still do that."