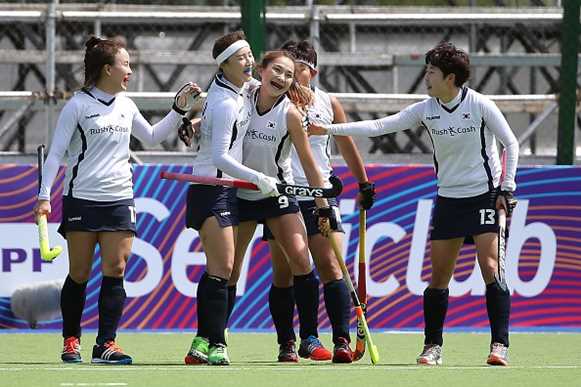 Korea - one of the emerging talents in world hockey

Korea women's team is currently enjoying a good level of success. The women's team are currently ranked eighth in the world and were the first women's team to qualify for the 2016 Olympic Games courtesy of winning gold at the Asia Games in 2014. They finished second in the Hockey World League Semi-Final in Antwerp, losing 2-1 in the final to the Netherlands, and they just failed to qualify for the semi-final of the HWL Final, losing out in a close encounter with China.

Coach to the team is Han Jin Soo. He explains how hockey is structured in the Asian country.

"Hockey is taught in schools, universities and clubs, but it is only taught in schools from the age of 14 onwards," says the genial coach. "Of course, it would be much better if it was taught from an earlier age, but that is not the case."

For students under the age of 14, there is a wide curriculum of activities: swimming, athletics and gymnastics, but once the children reach 14 then they get to choose the sporting route they wish to follow. The four main sports in the country are soccer, baseball, basketball and volleyball. Hockey is a poor relation compared to these giants.

"If we win a medal at the Olympics that could change," says Han and, indeed, it is through creating role models for the students that the Korea Hockey Association attracts young people into the sport. "We take our elite players into the elementary schools and they take coaching sessions and talk to the students about the sport," adds Han.

Within Korea, there are six men's clubs, six women's clubs and four university-based sides. These all come together for a series of tournaments every year and it is here that Han goes on talent spotting trips. He has a squad of 24 players, and this squad is reviewed after each major tournament. "I have a good communication line to the club coaches," he says. "They will contact me and say, 'I have this great young player', so I will go and watch a few games and if she is good enough, then she may join the national squad."

There are benefits to being in the national squad. Korea athletes are fully supported by the government. They train at the national hockey centre in Seoul and all their living costs are covered. There is the added incentive that, if they win an Olympic medal, they have an income for life.

But, while Han does a good impression of a man always happy with his lot, he says there are some things that would improve the standard of hockey in Korea. Coaching children from a  younger age is key, says the coach. The coaches within the schools are good and once the pupils choose hockey they get a lot of training – sometimes at least an hour every day – but they are playing catch-up with other nations.

Han would also like his national squad to experience more competition with European teams. "My players are small and slight," he says. "They need experience of playing against other teams so they learn how to play against teams that are more physical. Also, the way we play in Korea is very different to European hockey. We would benefit from travelling more. But it is all budget. We get a lot of support from the national association." He smiles as he says, "But we could always use more."