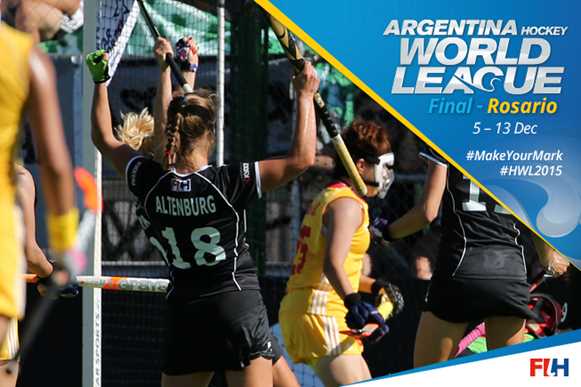 An exhilarating start by Germany got the team ranked ninth in the world off to a dream start in the contest between China and Germany at the Argentina Hockey World League Final on Sunday 13 December. Germany started strongly and never looked like being caught by China as they racked up a super-six goals to take third place in this season's HWL Final.

Pia-Sophie Oldhafer (8') opened the scoring with a smartly taken shot that caught goalkeeper Li Dongxiao off guard. Just a short few minutes later Eileen Hoffmann (9') made it 2-0 after a lovely interchange of passes with Anne Schroeder.

Li Dongxiao, who had an excellent tournament to that point, was unable to react to the change in direction. Julia Muller (13') got on the scoresheet with a cracking penalty corner strike to make it 3-0 and then Janne Muller-Weiland (15') added a fourth from another penalty corner just before the end of the first quarter.

China, who are ranked four places higher than their opponents, finally got an attack together and won a penalty corner after some tricky stick work by Zhang Jinrong. Wang Mengyu's shot was low and to the corner of the goal but Kristina Reynolds was on hand to divert it round the corner.

The China team continued to play with more energy and conviction and they were rewarded with another penalty corner. This time Wang (27') made no mistakes as she slotted the ball home under Reynolds.

The second half got underway with china changing the shape of their team slightly. Their top goal scorer Wang played ahead of her defence in order to pressure the German team higher up the field.

German coach Jamilon Mulders, speaking at half-time, said: "As we saw in the second quarter, you can never take your foot off the gas."

Peng Yang nearly brought her team right back into the game when she rattled a ball past Reynolds, but also just outside the post. The counter by the German team reaped its own reward as Lisa Schutze cracked the ball forwards and Marie Mavers was able to deflect it past Li to make it 5-1.

Lisa Altenburg made it 6-1 with just 3 minutes left in the third quarter. She was the recipient of a clever passing move through the midfield and, again, Li was caught out of position as the forward rocketed the ball home.

Still China continued to try to get back into this game. Yu Qian had a golden opportunity to put the ball into the net but scuffed her shot and Zhang Xiaoxue was also foiled in her attempt to reduce the deficit.

It was turning out to be one of those days for China. The usually impeccable Wang missed a gorgeously-weighted ball from Zhang which would have put her through on goal and despite China enjoying greater possession in the last six minutes of the game, they were unable to breach the German defence a further time.

German captain Janne Muller-Wieland said: "We just started to score goals in the last few days. It just all went right today. We don't have a lot of preparation time before events, so we build as we play. But now we are looking forward to carrying this success into the next competition."

And her team-mate Eileen Hoffmann added: "We have improved hugely when it comes to our mental approach. We talk in sub-groups – defence, midfield, forwards – and that helps. We don't truing together all the time as some teams do, but for me that is not always a bad thing. I think if you think hockey all the time, it is not a good place to be. I go to work others study and it gives us a different focus.