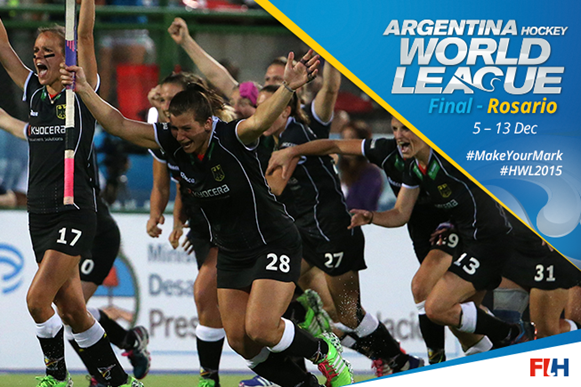 German women save best until last

The third quarter-final went to the wire as Germany scored a last minute equaliser and then defeated Australia's Hockeyroos 2-1 in the shoot-out.

The match between pool A winners Australia and Germany – who were fourth placed in pool B – looked to be going all Australia's way until Lisa Altenburg grabbed two goals in the dying minutes of both the third and fourth quarter to take the game to shoot out.

And when it comes to confidence in shoot-out situations there is no team with deeper self belief than Germany. And so it proved… Germany made no mistake as they beat the Hockeyroos 3-1 in shoot out, with Marie Mavers scoring the winning shoot-out goal.

The world number two side took an early lead when Ashleigh Nelson and Georgia Nanscawen combined to out-wit Kristina Reynolds in the German goal. It was Nanscawen (5') who got the touch after a great ball across the pitch from Ashleigh Nelson.

When it comes to quarter finals, Germany always play with belief and this opening half showed no change in this attitude. They certainly came to play and were not going to let a one goal deficit alter their pattern of play. With Janne Muller-Weiland and Nina Hasselmann offering a solid base from which to attack, the German team made sure the Hockeyroos didn't have everything their own way. Lisa Altenburg and Lisa Schutze were working hard to spread the field and get behind the Australian defence, with Marie Mavers also showing determination to get an attack going.

However, as the half counted down, mistakes began to creep into the play and structure of both sides. Misplaced passes meant the ball flew needlessly off the pitch and chances were wasted at both ends. The Australians were the first to rally and Kat Slattery (25') made it 2-0 when she pounced on a rebounded penalty corner shot that was struck by Jane Claxton.

This signalled a period of possession for the Australian team which always looked as if it could turn to a goal scoring opportunity. The half-time whistle came just when German coach Jamilon Mulders needed it most to refocus his team on the mammoth task ahead.

The second half was far more evenly matched. While Reynolds was called on to make a number of saves, so too the German forward line began to ask more of the Australian defence. The goal that changed the game was Altenburg's first (44'). The ball was picked up by Pia-Sophie Oldhafer and fed to Altenburg who hit it smartly past Ashlee Wells into the Australia goal.

Gabrielle Nance nearly restored the two goal cushion when she took the ball on a solo run into the circle. Her shot was parried by Reynolds, who then recovered her balance to clear. Reynolds continued to impress as the Hockeyroos peppered her goal. Kenny had a penalty corner saved and the German 'keeper was also quick to react to shot from Nelson.

At the other end, Wells also enjoyed a tough work-out. She made an inspired triple save, including a great effort from Jana Teschke. Seconds later she also managed to block a point blank shot from Eileen Hoffmann. In between both 'keepers' acrobatics, the posts also played their parts – both Germany and Australia had shots foiled by the post.

With two minutes left, Germany removed Reynolds to play 11 field players. The ploy worked as the team immediately won a penalty corner, but Lydia Haase failed to make the most of the opportunity. The moment of drama came in the final minute when Altenburg pounced to make it 2-2 and sent the game to shoot-out. And the rest, as they say, is history.