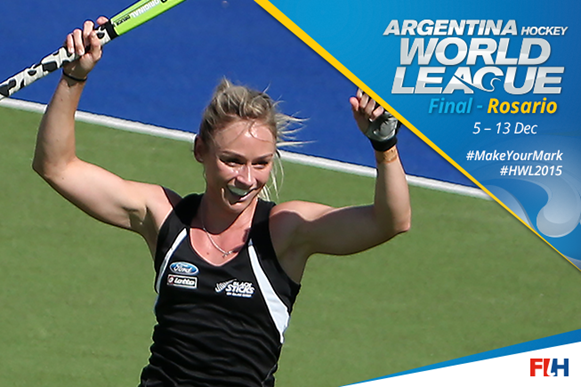 Olivia Merry was the hero for New Zealand as she scored in the final minute of the game to send the Black Sticks through to the semi-finals of the Argentina Hockey World League Final with a 2-1 win over Great Britain.

This was a match in which New Zealand dominated large periods of the game and when Great Britain were able to put an attack together, they were thwarted by a New Zealand defence that was uncompromising and disciplined.

The final scoreline was a fair reflection of a game that was played out in wiltingly hot conditions, although Maddie Hinch – one of Great Britain's best players on the day will rue the final goal, which seemed to catch her unawares.

The opening encounters in the second quarter-final of the Argentina Hockey World League went largely the way of New Zealand. The team ranked fourth in the world started brightly, working hard to pin Great Britain down in their half of the pitch. The first penalty corner was awarded to New Zealand after some penetrating build-up play by the Black Sticks. Brave running from Hannah MacLeod stopped the shot and Great Britain were able to break quickly. The New Zealand defence is both well-organised and strong, so there was no way through for the Great Britain forwards.

Desperate defending by Great Britain in the first part of the second quarter kept the New Zealand attack at bay until the 22nd minute. However a series of fine saves by Hinch was not enough to keep the Black Sticks out indefinitely and it was almost inevitable that the deadlock would be broken. New Zealand captain Anita Punt opened her account at this Final with a hard, lifted shot that flew past Hinch's left hand. Hinch will wonder where her defence were as she had stopped three shots before the fourth flew in.

The second half saw much of the same. New Zealand pushed forwards and made some good attacking moves but were unable to beat the flat sticks of the Great Britain defence. Great Britain, by contrast, didn't seem to have any players prepared to move forwards and put the New Zealand back line under pressure.

As the fourth quarter counted down, the standard of both team's play dropped off – passes went astray and tackles were clumsy. Hinch was on hand to stop Punt doubling her personal tally, and the last 10 minutes of the game saw the Great Britain defence play with bravery in the face of some fierce New Zealand penetrative play. Kirsten Pearce also brought out the best of Hinch. She picked up the ball with only the Great Britain 'keeper to beat, but there was no chance Hinch was going to lose that particular one-on-one.

With six minutes left, Alex Danson had a chance to equal the match but Sally Rutherford in the New Zealand goal was able to get a glove to the shot. The 'keeper was judged to have fouled and a penalty stroke was awarded. Helen Richardson-Walsh, who has been one of Great Britain's outstanding players, was on hand to slot the ball home for the equaliser.

As the match reached the penultimate five minutes the tempo raised dramatically for both teams. Great Britain began to play with confidence, New Zealand continued to pile on the pressure. A penalty corner gave New Zealand the chance to go ahead again. Hinch saved from Punt and it seemed destined for shoot-out until Olivia Merry stepped in with an absolute pearler of a goal. Her shot, from the reverse stick came very fast and from out of the sun. Hinch was unsighted and Merry was the hero.

The result means that New Zealand will face either Germany or Australia in the semi-finals.

Speaking after the game, Olivia Merry said: "I had no idea that ball was going in, I just turned and shot. It was a tight angle. That is the best we have played this tournament and for us the tournament has only just really started. Whether we play Australia or Germany. we don't mind. We have played them both in the past few weeks."

Great Britain coach Danny Kerry said: "We were quite naive and played some silly passes out of defence in the first half and then a silly mistake at the end. It was a turn-over ball and the ball went through Maddie's glove. It was an accumulation of a lot of little things and that means it gets away from you."

"I think the players now understand a little bit more. The younger players now get the tempo of the game and the heat of the quarter final format. They will probably play with a bit more brain and we won't let games get away from us."