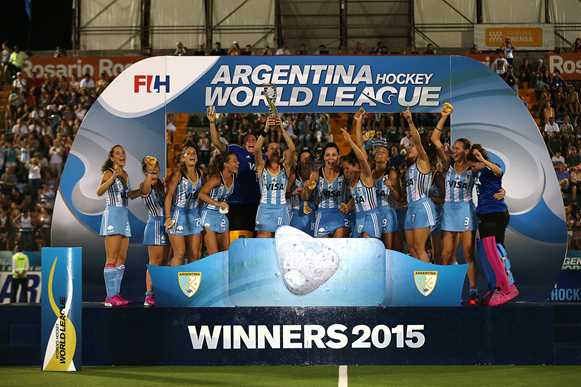 Argentina are the 2015 Hockey World League champions after defeating New Zealand 5-1 in the final in front of a capacity crowd at the newly-named Luciana Aymar Stadium in Rosario, Argentina.

After two years of global hockey competitions, it all came down to one hour of thrilling, competitive hockey.

While it was Argentina who dominated and wowed with their sublime skills, New Zealand – competing in their first major final since 2010 – played their part in this intriguing and highly-skilled match.

Both teams play a free-flowing and speedy game, so the action was end to end. The difference in style between the two teams is in the way the ball is moved in attack, New Zealand play fast passes to beat defenders, while Argentina run at the defence and use quick stick work to ghost past the opposition.

The opening 10 minutes of the match were dominated by the host nation as they poured forward into New Zealand's Black Sticks circle. Carla Rebecchi came closest to breaking the deadlock from a well-taken penalty corner, but Sally Rutherford in the New Zealand goal was on fine form as she dived high to her left to make an incredible save.

This served as the motivation that New Zealand needed and they broke at speed through their captain Anita Punt. Punt's shot was hard and low and, like her Black Sticks counterpart, Belen Succi pulled off a tremendous save to prevent an opening goal.

Just 15 seconds had gone in the second half before Las Leonas opened their account. It was the player voted Young Player of the Argentina Hockey World League Final, Maria Granatto (16'), who scored after a clever run gave her the space she needed to slip the ball past New Zealand's Rutherford.

Delfina Merino nearly made it two, when she undercut the ball at goal. Her shot flew wide, but the signal was clear – Argentina's Las Leonas meant business.

Granatto continued to trouble the New Zealand players with her lightening stick skills, but as Petrea Webster and Anita Punt began to run at the Argentina defence, so there was a sense that New Zealand were getting to grips with the intensity of this final.

As Martina Cavallero dived full length to keep the ball from going off the side-line there was no doubting the commitment of both teams to this game. Where Argentina were playing deep defence and speedy breaks, so New Zealand were playing the ball around to create gaps they could exploit.

Maria Campoy, Rocio Sanchez and Agustina Albertarrio were all running riot in the middle of the field whenever they got hold of the ball but Brooke Neal was strong at the heart of the Black Sticks defence.

A second penalty corner was won by the skill of Florencia Habif. Noel Barriounuevo's shot was saved but Campoy (29') was on hand to hit the ball home.

New Zealand started the second half with renewed determination and Anita Punt (34') demonstrated just why she is recognised as a world class player when she put a penalty corner drag flick high into the corner of Succi's goal.

The two-goal cushion was restored when Campoy got her second goal. It was made by the skill of Delfina Merino, who drew Rutherford out of position before slipping it back to Campoy who fired home. Campoy was on the attack minutes later. A poor pass out of defence by New Zealand led to Campoy forcing a penalty corner. Noel Barriounuevo buried the ball deep into the goal to take the score to 4-1.

The last quarter saw New Zealand continue to seek ways back into the game. They pressed high and peppered the Argentina defence with balls in, but failed to get into scoring positions. At the other end, Las Leonas continued on their charge towards the winners' podium.

Merino topped a great performance with an outstanding goal to make it 5-1 with just 10 minutes left on the clock. New Zealand continued to push but there was a tiredness creeping into their game. By contrast, sensing victory, Argentina continued to run and attack with energy and imagination.

While Argentina were deserving champions, a 5-1 scoreline justified the exciting and competitive nature of this, the second Hockey World League Final following season 1.

A jubliant and tearful Carla Rebecchi said: "I am so proud to have won a final in Rosario in front of such an amazing crowd and with this team."

Meanwhile, Coach to New Zealand, Mark Hager, said: "I am very proud of my team, we didn't play our best today, not in any area of the game. We let Argentina run with the ball way too much, but, look, we were in our first final and we have to learn how to perform in finals."