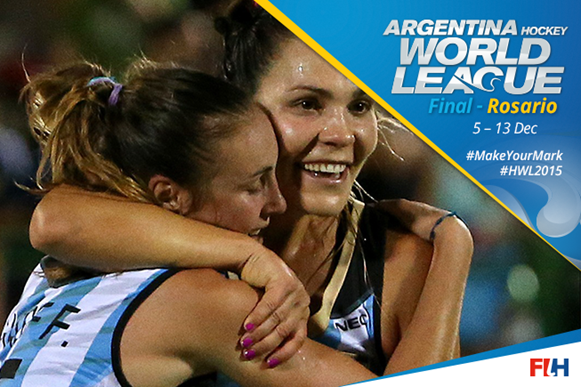 The form book was re-written as Argentina took control of the game against the world's number one ranked side, the Netherlands, and marched into the semi-finals of the Argentina Hockey World League Final to set up an encounter with China for a place in the final.

The team that had finished bottom of Pool A set out their stall early, putting their bodies on the line in defence and attacking with imagination and flair. The Netherlands, who had been so composed in earlier pool games, had no answers this time and will face playing off for 5th-8th place despite topping their pool.

Argentina got off to a dream start in the fourth quarter-final match of the Argentina Hockey World League Final when Delfina Merino smashed the ball into the goal past Joyce Sombroek to give Las Leonas the lead.

This followed some acrobatic moves from Belen Succi in the Argentina goal as she thwarted the Netherlands in their first two penalty corner attempts.

The match between the world's number one and number three sides was always going to be explosive and so it proved as the action flowed from end to end. The Netherlands began to build up a head of steam as the half progressed, pinging the ball around the ground and putting the Argentine defence under enormous pressure.

However the defensive unit led by Noel Barrionuevo, Victoria Zuloaga and Julai Gomes were adept at breaking down play and halting the Dutch attack.

A penalty corner won mid-way through the second quarter presented Caia van Maasakker with the perfect opportunity to reduce the deficit but her slip back to Naomi van As was intercepted by Gomes, who set up a speedy counter-attack.

The game settled into a pattern of attack and counter-attack as the Netherlands played with deft touches and incredible technical skills and the Argentina team matched them with tough tackles, hard running and great space creation whenever they won possession.

Argentina won their first penalty corner when van As unceremoniously bundled Argentina's captain Carla Rebecchi off the ball, but the Dutch defence was out sharply to cut out the threat.

Two minutes into the second half, Argentina won a second penalty corner. The shot was chased down by Willemijn Bos and it was Bos who also cleared the danger seconds later to set up a Netherlands counter-attack.

Argentina spent five minutes of the second half with just eight field players as Agustina Habif and Delfina Merino were both given yellow cards. The Netherlands camped in the Argentina circle area but were unable to get past the Argentina defence.

Another penalty corner was well saved by Succi and Alyson Annan's charges must have wondered what they needed to do to break down the stubborn Argentina resistance.

The final quarter saw the Dutch turn up the pressure and try to force errors in the Argentine defence. This left gaps, which a quick Argentine attack could exploit. That exploitation came in the shape of Merino who picked up the ball and glided past her opponents before firing an inch perfect pass to her colleague Rebecchi. In turn this brought a save of the highest quality from Sombroek.

At the other end of the pitch Succi was continuing to have an incredible game. Alert to every danger, she was out quickly to Lidewij Welten and smothered danger posed by the striker.