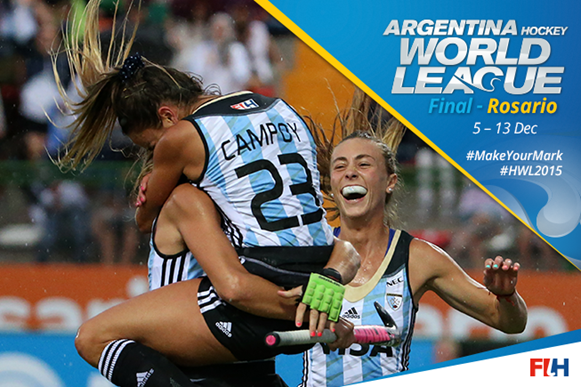 The second semi-final of the Argentina Hockey World League Final on Saturday 12 December was an encounter between the host nation Argentina and the runners-up from the Valencia HWL Semi-Finals, China.

The match, which finished 1-0 to Argentina was a game of cat and mouse as both teams tried to desperately break down staunch and well-organised defences with quick counter-attacking moves.

Argentina started strongly, and within seven minutes had won their first penalty corner after some strong running from the captain Carla Rebecchi. At the corner, the ball was switched to the far post by Delfina Merino where Maria Campoy (8') was on hand to slide the ball past Li Donxiao into the China goal.

China came to the game with a plan and despite Argentina taking the lead, they continued to play their own style of strategic, channeled play. Peng Yang was on hand to collect the ball as it was released down the line by Zhang Jinrong, but the Argentine defence was always wise to the move and the defence, marshalled by Noel Barrionuevo, was disciplined during these opening encounters. Belen Succi, who had been so instrumental in helping Argentina to the semi-final, was untroubled in the first quarter.

The second quarter followed much of the same pattern. Dupuy continued to sparkle with energy and it was her ball down the line to Maria Granatto that nearly put the young star into a goal scoring position. Speedy reactions from Li Dongxiao saved the day. Li Dongxiao was called on again just seconds later to make a fine double save when first Julia Gomes and then Dupuy took shots at the China 'keeper.

As the match progressed, Argentina played much of the game in the China half, but could find no way past the disciplined and brave Chinese defence. Such was the structure of both defensive units that neither of the goalkeepers were called on more than a handful of times in the first half. Meanwhile, the agile movement of Campoy continued to both impress and compound. She left the China defence tied in knots but still there was no way through for any shot on goal.

With under two minutes of the third quarter left a devastating run by Agustina Albertarrio left the Chinese defence standing and she won her team their fourth penalty corner. The shot was blocked and China cleared their circle with some relief.

With just 15 minutes left to get back into the game, China needed to start to pressure the Argentine defence as they looked to score the elusive equaliser. No matter how swiftly they transferred the ball around the pitch, the hard-working Argentine players were there, blocking China's progress up the pitch. With China looking to work the ball up the sides of the pitch, any time Las Leonas gained possession they were able to transfer the ball swiftly from side to side.

Rocio Sanchez played an important part in running the ball down the centre of the pitch to create opportunities and as the last quarter counted down, the speedy, skilful midfielder became increasingly influential to the Argentine attack.

With six minutes left, China began to really press high and leave gaps in their own defence. Julia Gomes, Dupuy and Martina Cavallero all took turns at running the ball at speed out of the Argentina half and playing China at their own counter-attacking game.

Speaking after the game, China captain Cui Qiuxia said she was devastated because the team had worked so hard. They would now have to pick themselves up for the bronze medal match. Team manager Zhao Xiaoyu added: "The team all had jobs to do and they all did them very well but Argentina are the third best team in the world and that was a tough game."

"It was a tough match but we played well," said captain Carla Rebecchi. "We were very pleased to concede no penalty corners as China have a great penalty corner routine. We would have liked to have scored more, but the important thing was to score a goal and not let that lead go."

"We have some new young players who have learnt a lot in this event. It is really important to use events like this in preparation for Rio with these young players."