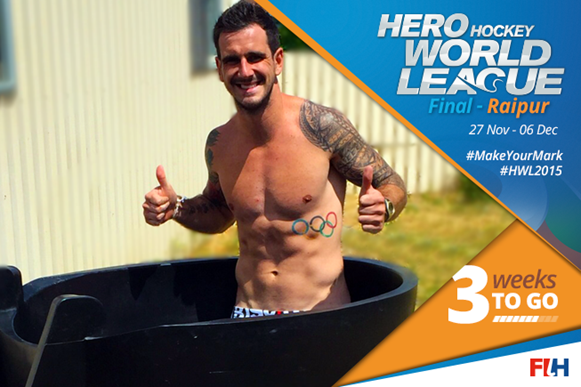 Raipur will welcome some of the fittest athletes in the world Photo: Kieran Govers

The fittest men on the planet?

Hockey players are some of the fittest athletes on the planet. Here's why...

Well it seems we have found our answer, thanks to FIH Innovation Partner Loughborough University – one of the top sports universities in the world. And the good news is - you can see them live in action at the Hero Hockey World League Final in Raipur!

The sports scientists at Loughborough studied hours of action from the 2014 World Cup and looked at two main qualities: namely the distances run during a match and the intensity maintained while running. They then compared these to other invasive team sports, in this case rugby 7s and football (soccer).

During those periods of high intensity activity, a hockey player will be running at speeds of above 19kmh.

On average, a hockey player will run eight to nine kilometres during a match. When compared to footballers, who regularly reach more than 10 kilometres in a game, it is worth remembering that hockey is a 60 minute game where football is 90 minutes. This means hockey players reach almost the same distance with a third less time to achieve it.

And it is not just the experts from Loughborough who have reached these conclusions.

An eminent professor, Jeff Potteiger, a Dean within the Movement Science department at Grand Valley State University in Michigan, told the Washington Post: “First, we have to define what ‘fittest’ means… I think you have to use cardiovascular fitness, anaerobic power, muscular strength, muscle endurance and body composition…”

The professor then rattled off several sports: “Soccer players, they have quickness, agility, speed but I would be concerned about their power; boxers are fit, but if you put them in another sport, I don’t know how well they would do… Now I forgot hockey players, they’re flexible, powerful, great body composition, good cardiovascular fitness. Yeah, I’d probably put them near the top.”

See some of the fittest athletes in the world live in action at the Hero Hockey World League between November 27 and December 6 in Raipur, India. To buy tickets, click here.