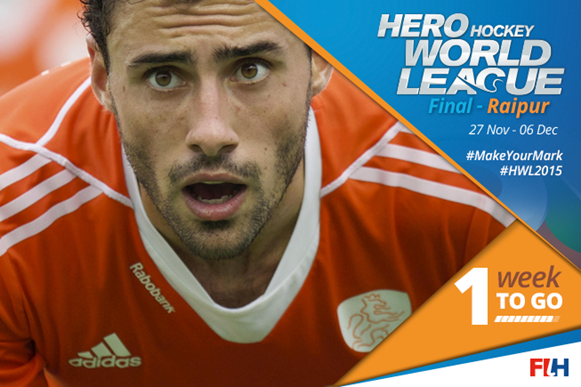 2013 was a disappointing year for Netherlands (FIH World Ranking: 2), the Olympic silver medallists from London 2012, but 2014 saw Oranje return to form in style. The year started with a stunning performance at the Hero Hockey World League Final, where they took the title by beating New Zealand 7-2 in the gold medal match.

The result sent out a strong message that they were serious contenders to claim a home victory at the Rabobank Hockey World Cup in The Hague, where they performed brilliantly to reach the final before being forced to settle for the silver medal as Australia’s Kookaburras claimed their second successive world crown with a dazzling 6-1 triumph.

In 2015, the influence of Max Caldas – the Buenos Aires born former Argentina international who between 2012 and 2014 guided the Netherlands women Olympic, World Cup and World League glory – has been clear for all to see, with the team sealing their place at the Rio 2016 Olympic Games with a third place finish in the ARG HWL Semi-Final in Buenos Aires before winning the Unibet EuroHockey Championships with an emphatic 6-1 final victory over Olympic champions Germany.

The Netherlands squad selected for Raipur contains a glittering array of world class talent including midfield dynamo Robert van der Horst, quick-silver striker Jeroen Hertzberger and skillful playmaker Billy Bakker, while powerhouse defender Mink van der Weerden is arguably the best penalty corner flicker in the world. In-form and with plenty of firepower, they could be the team to beat in Raipur.

Key Player: Robert van der Horst. Team captain Van der Horst is a central figure in the Dutch line-up thanks to his energy, skill and vision. This brilliant midfielder played an instrumental role in helping the Netherlands to claim both the silver medal at the Rabobank Hockey World Cup and their stunning gold medal success in August’s Unibet EuroHockey Championships. The 31-year-old is one of the most experienced players in the Dutch line-up, having made well over 200 international appearances.

Coach quote - Max Caldas: “All of the players selected have been involved in tournaments in recent years. In this period, the emphasis is less on the team and more on individual development. Of course this year was about qualifying for Rio, but we go to India with a clear objective to win this tournament.”