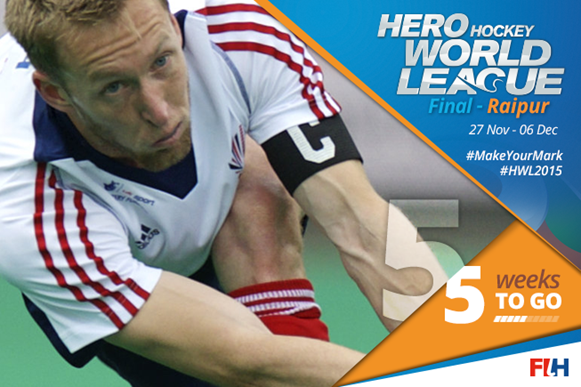 Following their fourth place finish at the London 2012 Olympics, Great Britain (FIH World Ranking based as England: 4) have set their sights firmly on winning a medal at Rio 2016. Looking at their recent history, you certainly wouldn’t bet against them.

There has been a steady improvement since their disappointing ninth place finish at the Athens 2004 Games, with the team taking fifth at Beijing 2008 before losing the Bronze medal match at London 2012 against Australia’s Kookaburras.

The team coached by ex-England & GB striker Bobby Crutchley sealed tickets to Rio and Raipur - the host city of the Hero Hockey World League (HWL) Final - with a third place finish at the FINTRO HWL Semi-Final in Antwerp, Belgium, with Ali Brogdon, Chris Griffiths, Ashley Jackson, Adam Dixon and Barry Middleton all on target as Brits claimed a 5-1 win over India.

Although many see midfield ace Jackson as Great Britain’s star player, there are numerous other top class internationals in the current group to keep a close eye on.

Middleton, the team’s captain and attacking focal point, has over 350 combined England and GB caps under his belt and is a hugely influential figure both on and off the field.

Having represented Great Britain at the Athens 2004, Beijing 2008 and London 2012 Olympics, Middleton’s vast experience is crucially important as the team builds towards Rio 2016.

Defender Iain Lewers was a star player at the FINTRO HWL Semi-Final in Antwerp, while Adam Dixon and Nick Catlin are both consistently excellent performers on the international stage.

Key player: Ashley Jackson. Alongside Middleton, this 28-year-old midfielder is one of Great Britain’s most gifted hockey players. He possesses fantastic stick skills, a terrific eye for a pass and is one of the finest penalty corner drag-flickers in the game. As always, Jackson is expected to be one of the stars of the show in Raipur.

Additional information: Great Britain's athletes are up there with the fittest sportspeople around. Typically, members of both the men’s and women’s squads are put through their paces on the hockey pitch at Bisham Abbey National Sports Centre (approx. 30 miles / 48 kilomtres west of London) for at least 12 hours a week. This is supported by a minimum of two gym sessions a week in the athletes’ gym, a top facility run by the English Institute of Sport (EIS) and accessible only to elite athletes. On top of these team training sessions, GB hockey athletes also undertake individual training on the hockey pitch and in the gym almost every day.