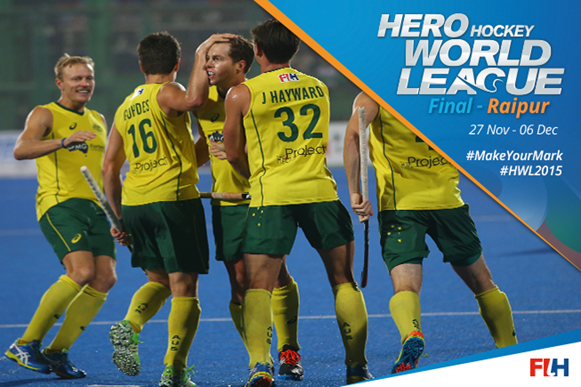 The Kookaburras' opponents in the final will be either Belgium or India, who meet in their semi-final on Saturday. In a high quality match, five times FIH Player of the Year Dwyer provided the perfect pass for Dylan Wotherspoon to open the scoring before forcing a save from Hero Man of the Match goalkeeper Jaap Stockmann only for Daniel Beale to fire home from close range. The Oceania champions could easily have scored more, but the Dutch fought back with excellent finishes from Constantijn Jonker and Mirco Pruijser either side of half time to level the match at 2-2.

The winning goal arrived in the 42nd minute, with Matt Gohdes getting the perfect touch inside the scoring circle to guide the ball just inside the right post, giving Australia a narrow victory over the defending Hockey World League champions.

"It doesn’t feel like I’ve played 350 games, to be honest with you”, said Dwyer after the match. “I just want to go out there and play hockey for my country, and to do it so many times, I’m very proud and honoured to do so. Every time I go out there I just really enjoy wearing the green and gold shirt and representing my country. I guess this year I had something to prove, both to myself and to those people who didn’t think I could do it at 36 years of age. It is good to be out there, not just participating but also having an influence.”

The 5-6 Classification match also took place on Friday, with Argentina securing a fifth place finish with a 4-2 win over Great Britain.

Argentina needed just 17 minutes to establish a 3-0 lead, with team captain Pedro Ibarra scoring two penalty corners either side of a trademark set piece from Gonzalo Peillat. Simon Mantell pulled a goal back for Great Britain in the fourth quarter before Peillat scored his second of the match and eighth of the tournament with six minutes remaining.

Great Britain’s Phil Roper completed the match scoring three minutes from time, but it was not enough to stop Great Britain finishing the competition in sixth place.