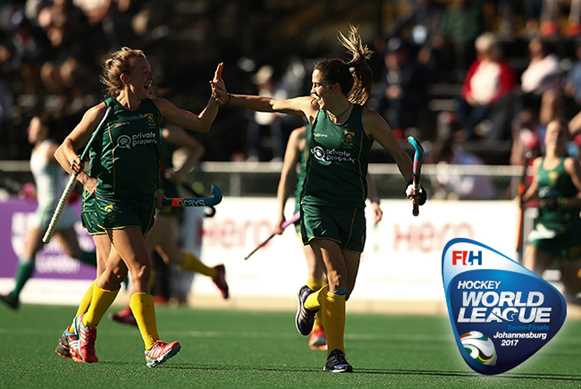 Johannesburg, South Africa: Germany and USA will contest the women’s final of the Hockey World League Semi-Final event after both nations overcame the respective challenges of Argentina and England on Day 13 at the University of the Witwatersrand.

Germany produced a battling performance to triumph 2-1 over Argentina, with Charlotte Stapenhorst scoring the decisive goal as Die Danas claimed their place in the showpiece match. USA and England needed a shoot-out to separate them, with American goalkeeper Jackie Briggs proving the hero with a string of outstanding saves to set up their final meeting with Germany.

The women’s competition final will take place on Sunday 23 July at 15:30 South African Standard Time (UTC +2), while Argentina and England will go head-to-head in the 3-4 classification match on the same day at 11:00.

It was confirmed that the top six from this event would achieve World Cup qualification earlier this week, when England - the hosts of next year’s global showpiece - guaranteed a top five finish by winning their quarter-final. It meant that the highest ranked sixth place finisher from the two Hockey World League Semi-Final events in Belgium and Johannesburg would be guaranteed a World Cup berth. All four of the teams that reached the 5-8 play-off matches are placed higher in in the FIH Hero World Rankings than Italy, the team that finished sixth in Brussels, guaranteeing that the top six from South Africa would all be assured of a World Cup place.

The first of the event semi-finals was packed full of intense action and high drama, with Germany (WR: 7) providing a shock result against an Argentina (WR: 3) side that have been one of the most impressive performers here in Johannesburg. Die Danas were the quickest out of the blocks, taking the lead just seven minutes into the contest when Naomi Heyn converted a slick penalty corner routine. Las Leonas hit back at the start of the second quarter thanks Lucina von der Heyde's brilliant penalty corner deflection, but Germany scored what proved to be the winner on the stroke of half time with composed close range finish from the excellent Charlotte Stapenhorst. Janne Müller-Wieland made her 250th senior international appearance for Germany, with the victory ensuring it was a truly memorable day.

“It is always nice to score, but it is for the team so it doesn’t matter who scores”, said Charlotte Stapenhorst after the match, before discussing which team she would prefer to meet in the competition final. “To be honest I don’t really care. We just want to win this thing now but we have history with England, so maybe it should be them who we meet in the final.”

Stapenhorst’s desire to meet England (WR: 2) in the competition final did not materialise, as USA (WR: 6) battled back from a goal down to force a shoot-out in which goalkeeper Jackie Briggs excelled. Hannah Martin gave England the lead a minute into the second quarter, finishing off a slick passing move involving Susannah Townsend and Sophie Bray, the latter of which was making her 100th senior international appearance. USA dominated the third and fourth quarter before getting that all important goal through Jill Witmer with three minutes remaining.

The shoot-out was dominated by two outstanding goalkeepers, with England's Maddie Hinch and USA's Briggs both only being beaten once before it went to sudden death. The winning goal came from the stick of Melissa Gonzalez - the only player to score past Hinch in the first barrage - firing into the roof of the net following another crucial save from Briggs.

"I feel blessed that Jackie is in our team, I cannot say enough good things about her", said Gonzalez after the match. "England are a great team full of world class players, so it was a big result for us."

The 5-8 play-off matches both took place ahead of the quarter-finals, with Japan (WR: 11) and India (WR: 12) being first in action. Both of Japan’s goals came courtesy of penalty corners, as Kana Nomura and Naho Ichitani put the Cherry Blossoms into a 2-0 lead before half time. India rallied in the latter stages but could not get the goals they required, with Japan reaching Saturday’s 5-6 classification match where they will face fellow World Cup qualifiers South Africa (WR: 13), conquerers of Ireland (WR: 15).

The home favourites were the better team in the opening two quarters and took a deserved 1-0 lead into half time thanks to Lisa-Marie Deetlefs penalty corner. The Green Army were much improved after the break, but strikes from Bernie Coston and Lilian du Plessis - the latter arriving after Ireland replaced their goalkeeper with a kicking back - gave South Africa World Cup qualification on home soil. India and Ireland will now play-off for seventh place, which is crucial for World Ranking points and may also keep alive World Cup qualification hopes, depending on what happens in the upcoming Continental Championships.

Earlier in the day, Chile (WR: 20) defeated Poland (WR: 18) 2-1 to secure a ninth place finish in the event with the Poles finishing in tenth.

The men’s competition semi-finals in Johannesburg take place on Friday 21 July, with Spain playing Germany at 16:45 South Africa Standard Time (UTC +2) before a mouthwatering meeting between Belgium and Australia gets underway at 19:00. In the 5-8 play-off matches, Egypt will take on New Zealand at 12:15 while Ireland play France at 14:30 as the race for fifth place and the subsequent World Cup ticket that comes with it continues.