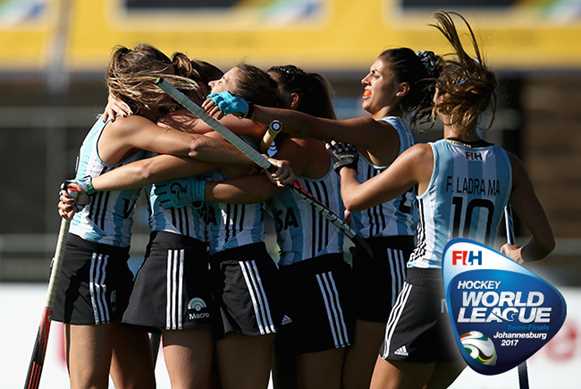 Argentina booked their tickets to the World Cup and the World League Final on Day 11 in Johannesburg. Copyright: FIH / Getty Images

Johannesburg, South Africa: It was women’s quarter-final day at the Hockey World League Semi-Final, with USA, Argentina, England and Germany all winning their matches to move into the competition final four as well as securing qualification for two of the sport’s biggest occasions.

For USA, Argentina and Germany, their respective quarter-final victories over Japan, Ireland and hosts South Africa earned them direct tickets to both the Hockey World League Final 2017 in Auckland, New Zealand and Hockey Women’s World Cup London 2018. They will be joined in the Hockey World League Final by England, who beat India on Tuesday, with the line-up being completed by New Zealand, Netherlands, China and Korea, who recently claimed the top four positions at the Semi-Final event in Belgium.

Interestingly, England’s safe passage through to the final four in Johannesburg has a knock-on effect in terms of qualification for next year’s women’s World Cup. As hosts, England have already qualified, which means that the highest ranked of the two sixth placed finishers from the women’s Hockey World League Semi-Final events in Belgium and South Africa will now also be certain of a World Cup place. Italy (WR: 16), who finished sixth in Belgium, will be confirmed at the World Cup if the team that finishes sixth in Johannesburg are ranked below them.

In terms of the event semi-finals here in Johannesburg, the matches and timings have been confirmed. On Thursday 18th July, Germany will play Argentina at 16:45 South Africa Standard Time (UTC +2) with England and USA going head to head at 1900.

The quarter-final meeting between USA (FIH Hero World Ranking: 6) and Japan (WR: 11) was a nervy affair with both teams conscious it was winner takes all in terms of World Cup and World League Final qualification. Despite both teams having suffered inconsistency throughout the event, Japan and USA were resilient with their structure, cancelling each other out across the field. With very few goal scoring opportunities it took until the 42nd minute for USA to make the breakthrough. Michelle Vittese took the ball from a free hit into the circle and her shot deflected off Japan’s Mami Ichitani, deceived her ‘keeper. USA controlled the remainder of the game and despite a few nervy moments took the victory and a spot on both the Hockey World League Final 2017 and Hockey World Cup 2018.

“We came into this match on the back of two pretty rough games, and we knew that Japan have been playing really well in this tournament”, said USA’s Michelle Vitesse after the contest. “We did a lot of preparation ahead of this match because we knew it was going to be a really hard fought battle, so it feels really good that we fell back onto our cornerstones which is defensive intent, resilience and grit.”   Argentina (WR: 3) showed why they’re one of the top teams in the world right now after grinding out a 2-1 win against a determined Ireland (WR: 15). Delfina Merino capitalised on a mistake by Ireland’s Nicci Daly, rounding both an Irish defender and their ‘keeper to slot in the first goal after 25 minutes. Julia Gomes doubled Las Leonas lead on the 40 minute mark through a penalty corner slotted low past the right side of Irish goalkeeper Ayeisha McFerran. Ireland fought back however in the 43rd minute, halving their opponents lead thanks to a penalty corner from Roisin Upton. Argentina held on however to claim their tickets to Auckland and London for the World League Final and World Cup respectively.

World Cup hosts England (WR: 2) confirmed that they would also be heading to Auckland at the end of the year, overpowering India (WR: 12) 4-1 despite the absence of the influential but under-the-weather Lily Owsley. Giselle Ansley put England ahead from the penalty spot six minutes into the contest before captain Alex Danson doubled the advantage before the end of the first quarter. Susannah Townsend volleyed in a third in the 42nd minute, although India’s Eves gave themselves a glimmer of hope three minutes from the end when Gurjit Kaur netted from a penalty corner. However, England rounded of a solid performance with a open play strike from Hannah Martin, a goal that she richly deserved after being a consistent attacking threat. It was a extra special day for England defender Laura Unsworth, whose 200th international appearance was marked in winning style.

In the final match of the day, home favourites South Africa produced a monumental effort against Rio 2016 Olympic bronze medallists Germany but it was not quite enough, with the European nation winning 1-0. As has been a constant throughout this, a huge crowd was on site to witness not just the match but also the 200th international appearance of South Africa captain Nicolene Terblanche. However, they were to leave disappointed as Camille Nobis scored the only goal of the game to help Germany secure their safe passage through to the World Cup and the World League Final. South Africa’s chances of World Cup qualification remain alive as they will compete in the 5-8 classification matches.

“Qualifying for the World Cup was our main aim for this year, so obviously we are delighted”, said Germany's Janne Muller-Weiland after the match. “It means a lot to us, to travel here and achieve that.”

On Wednesday 19th July, the quarter-finals of the men’s competition will take place, with a place at both the Odisha Men’s Hockey World League Final Bhubaneswar 2017 and the Odisha Hockey Men’s World Cup Bhubaneswar 2018 on the table for the winners. At 11:15 South African Standard Time (UTC +2), Pool A winners Australia will take on Egypt, who finished fourth in Pool B before Pool A’s second ranked team Spain face Ireland, who finished third in Pool B, at 13:30. Pool B winners Germany go head-to-head with Pool A’s fourth placed team France at 15:45, with Pool B runners-up Belgium playing Pool A’s third place finishers New Zealand at 1800.