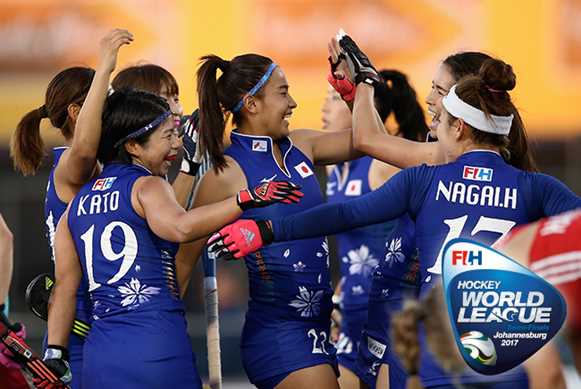 Johannesburg, South Africa: The quarter-final line-up in the women’s competition at the Hockey World League Semi-Final currently being played in South Africa is beginning to take shape, with only two places left to fight for at the end of Day 5 at Johannesburg’s University of the Witwatersrand.

India (FIH Hero World Ranking: 12) sealed their place in the quarter-finals with a narrow 1-0 Pool B victory over Chile (WR: 20), a result which leaves the South Americans’ own dreams of achieving qualification for the Hockey World Cup 2018 and Hockey World League Final very much in the balance. Preeti Dubey’s 38th minute field goal proved to be enough to seal the win for India, who will now focus on finishing as high up the pool standings as possible in order to get the best outcome in the cross-over quarter-finals.

“We are happy that we won and have made the quarter-finals”, said India captain Rani after the match. “It was not our best game today and they had some good chances but they didn’t equalise. All that matters was the three points so I’m delighted.”

India join USA and Argentina as the guaranteed quarter-finalists from Pool B, although the final pool placement is yet to be decided. With a first place finish setting up a match against the team that finishes fourth in Pool A, there is plenty still to play for.

Chile now face a do-or-die clash with South Africa (WR: 13) - who fell to a narrow 3-1 defeat against Argentina (WR: 3) in the evening match - in their final Pool B match, although not even a victory would guarantee Las Diablas a place in the quarter-finals as they would still need to wait for the outcome of South Africa’s final pool match against USA on 16th July. For South Africa, a draw against Chile would being good enough to guarantee a quarter-final berth thanks in part to the point they secured against India in their opening day draw.

A full house watched South Africa take on illustrious Argentina in the final match of the day, and the home fans were thrilled to see the hosts take the lead just before half time thanks to Bernie Coston’s field goal. Argentina drew level when Noel Barrionuevo netted from the penalty spot before ferocious strikes from Delfina Merino and Florencia Habif gave Las Leonas a win that moves them level with USA at the top of Pool B.

Argentina goalscorer Delfina Merino said: “We had to work really hard to get back into the game, but I’m pleased with the victory and we are in a very good position here. The crowd was amazing, it was such a good atmosphere.”

In Pool A, Ireland (WR: 15) secured their place in the quarter-finals with a battling 2-0 victory against Poland (WR: 18), with Japan (WR: 11) upsetting the world rankings with a surprise 1-0 win over England (WR: 2). The Green Army remain unbeaten here in Johannesburg, having previously drawn with both Japan and Germany ahead of their triumph against Poland, which takes them onto five points.

Nikki Evans and Gill Pinder scored the all-important goals, with Pinder’s thunderous strike into the top right corner from distance being arguably the goal of the day.

“It wasn’t the best performance but we will take it”, said Ireland Head Coach Graham Shaw. “There is a lot of pressure in these games and the most important thing is we got the win and secured the quarter-final place. We can rest now and look forward to playing England on Sunday.”

For Poland, the defeat was a big blow to their own chances of reaching the event quarter-finals, with the team sitting bottom of Pool A with just one match remaining.

Japan’s victory over England came courtesy of a Mami Karino’s close range finish in the third minute, with the Cherry Blossoms producing a monumental defensive performance against the top ranked team in the competition. England dominated the vast majority of the match but could not find a way past Japan goalkeeper Megumi Kageyama, who made numerous world class saves as Japan enjoyed one of their most notable results in recent years.

“We had to do a lot of defending today, but we managed to hold on”, said delighted Cherry Blossoms captain Shihori Oikawa. “We want to qualify for the World Cup, something which would make us all proud.”

Despite the loss, England still have two Pool A matches to play in order to get the solitary point needed to secure their place in the quarter-finals, with the currently unbeaten Germany and Ireland being their upcoming opponents.

On Thursday 13 July, the third day of play in the men’s competition will take place, with eight teams continuing their drive to secure their respective places in the quarter-finals. The first match of the day sees Ireland playing Egypt at 1200 South African Standard Time (UTC +2), with the Egyptians needing a win to move away from the bottom of the Pool B standings. At 1400, the bottom two teams in Pool A meet with France playing Japan, a match followed by another Pool A contest as Spain and Australia - both winners in their opening matches - in action at 1600. Home favourites South Africa take on Germany at 1800, with a packed stadium expected as the host nation look to claim their first win of the competition against the Rio 2016 Olympic bronze medallists.