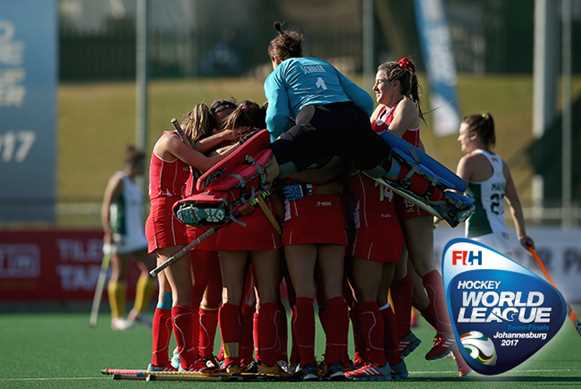 Chile claimed a crucial win against host nation South Africa to remain in the hunt for a place in the competition quarter-finals in Johannesburg. Copyright: FIH / Getty Images

Johannesburg, South Africa: Chile kept alive their hopes of achieving a first ever Hockey World Cup qualification by claiming a crucial victory, while Japan and Argentina took control of their respective pools at the women’s Hockey World League Semi-Final at the University of the Witwatersrand.

In Pool A, Poland’s (FIH Hero World Ranking: 18) hopes of reaching the quarter-finals were ended when they fell to a 2-0 defeat against Japan (WR: 11). The Cherry Blossoms scored goals in the third and fourth quarters through Hazuki Nagai and Kana Nomura to remain very much in the hunt for a first place finish, which would set up a quarter-final match against the team that finishes fourth in Pool B.

“I think we controlled possession very well although we probably didn’t open them up as much as we would have liked to”, said Japan Head Coach Anthony Farry after the match, before confirming that his player’s minds were very much on their final pool game against Germany before allowing any thoughts about the quarter-finals to creep in. “The Germany match will determine where we will finish. We’ve got a fair bit of work to do ourselves before we worry about that too much.”

Japan enter Sunday’s meeting with Germany knowing that victory would be enough to guarantee that crucial first place finish. For Poland, they are now certain of a fifth place finish and will play in the 9-10 classification match.

Both England (WR: 7) and Germany (WR: 2) were in action in the day’s final match, with England edging a tight but entertaining match 1-0 thanks to a superb penalty corner deflection from Jo Hunter. It was the perfect way for Danny Kerry’s team to bounce back after their narrow defeat to Japan on Wednesday, and puts them second in the pool ahead of their face-off with third placed Ireland on Sunday.

“It was a big step up from our defeat against Japan and we had to regroup yesterday and refocus on today’s game”, said England’s Jo Hunter post-match. It was tough physically, a high speed game and we put everything into it and created a lot of chances and eventually got the goal.”

In Pool B, Chile (WR: 20) upset both the home fans and the world rankings with a hard earned 1-0 win over host nation South Africa (WR: 13) to move ahead of their opponents to occupy the fourth quarter-final qualification position. It was a stunning result for the Chileans in their final pool match, although they now must wait for the outcome of South Africa’s concluding pool game against USA before knowing their fate. South Africa’s fate is very much in their own hands, but a win against Janneke Schopman’s USA - defeated by Argentina in the third match of the day - is no easy feat.

As has been the case throughout this event, a big crowd was in attendance to watch the home team in action, but it Manuela Urroz’s penalty corner two minutes after half time that proved decisive as Las Diablas kept alive their dream of qualifying for their first ever Hockey World Cup with the victory.

Speaking after the match, a clearly emotional Chile captain Camila Caram said: “To qualify would mean the world to us. We have never been to a World Cup, so just imagine it.”

At the other end of the Pool B table, the battle between the top two teams took place with Argentina (WR: 3) defeating Pan-American rivals USA (WR: 6) 4-0. The result means that Las Leonas are sitting pretty at the top of the pool, and will be seen as favourites to hold onto that position going into their final pool match against India.

Both sides cancelled each other out for the majority of the first two periods before Argentina took the lead just before half time thanks to Lucina van der Heyde’s penalty corner. Las Leonas effectively ended the contest with two quick-fire goals just after the break, with Martina Cavallero and Agustina Habif on target before 18-year-old Julieta Jankunas, top scorer at the Nanjing 2014 Youth Olympic Games, completed the match scoring.

Speaking after the match, Argentina youngster Eugenia Trinchinetti said: “The plan was to win, of course. We know that USA is a good team so we were well prepared and are very happy because we did what we needed to do. We are thinking about the India match now, so we’ll see what happens.”

On Saturday 15th July, four important matches in the men’s competition will take place as the race to finish as high as possible in the pool standings continues. Remarkably, all four matches are continental derbies, with Europe’s France taking on Spain at 1200 South African Standard Time (UTC +2) before great Oceania rivals New Zealand and Australia play at 1400. Those Pool A matches are followed by a meeting between African nations Egypt and hosts South Africa at 1600, with European giants Belgium and Germany taking to the field at 1800.