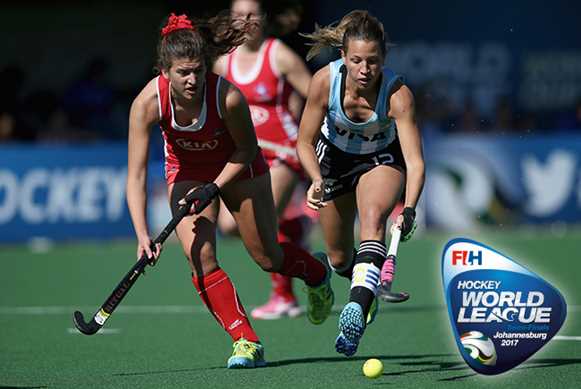 Action from the Pool B clash between Argentina versus Chile on Day 3 at the Hockey World League Semi-Finals in Johannesburg, South Africa. Copyright: FIH / Getty Images

Johannesburg, South Africa: Germany and USA ended Day 3 of the Hockey World League Semi-Finals at the top of the women’s pools, while Argentina and England got their campaigns underway with victories.

The day’s play was bookended by matches taking place in Pool B, with Argentina (FIH Hero World Ranking: 3) claiming a narrow but deserved 2-0 win against Pan-American rivals Chile (WR: 20), a team coached by legendary Leonas tactician Sergio Vigil, in the first match of the day. Las Diablas found themselves a goal down after just six minutes when Argentina defender Noel Barrionuevo scored from the penalty spot, an advantage that was doubled just before half time thanks to Agustina Habif’s penalty corner. Argentina dominated possession but found life tough going against an extremely well organised Chilean side before emerging with all three points in their opening match of the competition. Despite defeat, the it was a landmark day for Chile’s Denise Krimerman, who played her 100th international match.

USA (WR: 6) and India (WR: 12) took to the field under the floodlights in the day’s final match, with the Americans proving too strong for the Eves to maintain their winning start to the competition and finish the day at the top of the Pool B standings. Jill Witmer gave USA the lead with a blistering backhand strike in the 24th minute, with India levelling matters eight minutes after half time thanks to Lilima Minz. However, the Americans scored three times without reply with Taylor West, Witmer and Michelle Vitesse completing a 4-1 victory, virtually guaranteeing their place in the competition quarter-finals of this World Cup and World League Final qualification competition.

In Pool A, Germany (WR: 7) and Ireland (WR: 15) played out an entertaining and dramatic fixture, with the Green Army pushing the Olympic bronze medallists all the way before eventually having to settle for their second draw of the competition as the match finished 2-2. Ireland were the better team in the opening stages and took the lead in the 14th minute when Zoe Wilson’s penalty corner strike took a wicked deflection from the stick of Germany’s Nike Lorenz, deceiving the goalkeeper with the ball flying into the net. Germany attacked for long periods but found themselves frustrated by a resilient Irish defence, with goalkeeper Ayeisha McFerran making numerous fine saves before eventually being beaten by a slick penalty corner routine finished off by Amelie Wortmann. The leveller set up a dramatic finish that saw both sides score in the final 60 seconds, with Ireland’s Deirdre Duke passing into an open net before Germany claimed a share of the spoils thanks to a penalty corner from Nike Lorenz.

“We are disappointed not to have held on but we played really well today, especially in defence”, said Ireland goal-scorer Deirdre Duke. “We’ll start planning for our match against Poland as we need to win that if we are to reach the competition quarter-finals.”

A point for Germany was enough to keep them at the top of Pool A, although a convincing 3-0 victory for England (WR: 2) against Poland (WR: 18) in their opening game of the competition resulted in Danny Kerry’s team moving within a point of Die Danas. Rio 2016 Olympic gold medallist Sophie Bray smashed home England’s first goal following a trademark jinxing run in the third minute, and it was Bray again who doubled the advantage with a smart touch in front of Poland keeper Anna Gabala ahead of the quarter-time break. Team captain Alex Danson scored wonderful third with a diving backhand chip, while Giselle Ansley squandered the chance to make it 4-0 with a missed penalty stroke.

It was a solid start for England and a special day for England striker Nicola White, who made her 100th appearance for England in the contest. It was also a day to remember for umpire Kelly Hudson, who was presented with her Golden Whistle after reaching the milestone of umpiring 100 international matches recently in New Zealand.

The attention switches back to the men’s competition on Tuesday (11th July), with Olympic bronze medallists Germany making their competition debut when they take on Pool B opponents Egypt at 1200 South African Standard Time (UTC +2). Reigning world champions Australia  get begin their Hockey World League title defence at 1400 when they meet France in Pool A, which is followed by another Pool A fixture when New Zealand face Japan at 1600. The final match of the day is a face-off between two teams that recorded victories in their opening fixtures, with Belgium’s Red Lions playing Ireland’s Green Machine at 1800.