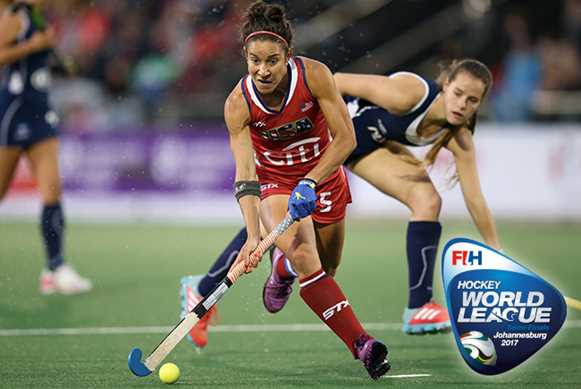 Johannesburg, South Africa: Germany and USA both claimed victories on the opening day of the Women’s Hockey World League Semi-Final, making a solid start to their respective pool campaigns in the race to secure World Cup qualification.

The day’s action began in Pool A, where Ireland’s Green Army (FIH Hero World Ranking: 15) produced a high quality display against Japan’s Cherry Blossoms (WR: 11), drawing 1-1 with their higher ranked opponents. The two sides were evenly matched throughout, although it was the Europeans who struck the first blow when Roisin Upton’s penalty corner drag flick rattled the Japanese backboard just before the end of the third quarter. A penalty corner from Shihori Oikawa levelled the scores with nine minutes remaining, ensuring that the points were shared.

“It was an end to end game of hockey and either team could have gone away with all three points,” said Ireland captain Kate Mullan immediately after the game. “From that perspective it would have been nice to take all three points but when you step back and take a look at the rankings it was a good point to get.”

As with the opening game of the competition, Rio 2016 bronze medallists Germany (WR: 7) also waited until the third quarter in their Pool A match against Poland (WR: 18) before breaking the deadlock, with Elisa Gräve forcing home from close range seconds after Camile Nobis hit the frame of the Poland goal. It proved to be the only goal of a game that, in terms of goal-scoring chances, was dominated by Die Danas but registering only one goal proved to be a point of frustration for Germany’s Franzisca Hauke.

“Poland defended really well, it was hard for us”, said Hauke post-match. “‘I’m happy we won, but it wasn’t our best match. We had a lot of chances so we should have scored more goals, but they also had chances so it was a lucky win, I think. We have a lot to improve, but hopefully on Monday we will produce a better performance against Ireland.”

In Pool B, Pan-American rivals USA (WR: 6) and Chile (WR: 20) played out an absorbing contest in which the Americans emerged narrow winners with a 1-0 score-line. Jill Witmer celebrated her 100th senior international appearance with the only goal of the game, although Chile gave a superb showing of themselves and look more than capable of challenging all of their opponents in this pool. “Chile have hugely improved, they were a real threat today”, said USA’s Michelle Vittese after the contest. “I’m pleased to get through it and start the competition with a victory.”

Host nation South Africa (WR: 13) and India (WR: 12) were in action in the final match of the day, with a large contingent of home fans enjoying an entertaining contest despite the scores finishing locked together at 0-0. South Africa arguably had the better of the chances even had a goal ruled out by the video umpire, but India’s Eves were excellent in defence and deserved their share of the spoils. Although she could not celebrate a win, the experience of the contest left an impression Shelley Jones (formerly Russell). “It was absolutely fantastic to play in front of the home crowd tonight. There was huge roar every time we went forward, which was fantastic. It is a good point for us but we want to get as many as we can in the pool phase.”

The action continues on Sunday (9th July) with the start of the men’s competition. In Pool A, New Zealand’s Black Sticks get their competition up and running when they take on Round 2 qualifiers France at 1200 South African Standard Time (UTC +2) before Spain and Japan take to the field at 1400. The Pool B matches begin at 1600 when Rio 2016 Olympic silver medallists Belgium take on Egypt before host nation South Africa play Ireland’s Green Machine at 1800.