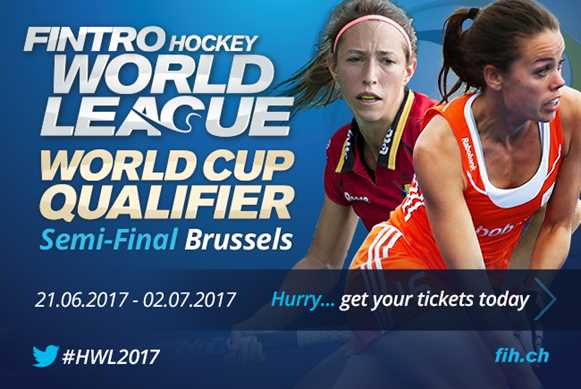 The International Hockey Federation (FIH) has announced the schedule of the Women’s FINTRO Hockey World League Semi-Final 2017 in Brussels, Belgium, signalling the official launch of ticket sales for the event.

The Hockey World Cup 2018 qualifier, which takes place between 21 June and 2 July 2017 at the Stade Fallon, will feature 10 of the world’s best women’s hockey teams.

Seven teams are already confirmed for this showcase event, including reigning Hockey World Cup champions Netherlands, who currently sit at the top of the FIH Hero World Rankings. They will be looking for back to back wins in Belgium after winning the FINTRO Hockey World League Semi-Final held in Antwerp back in 2015.

2016 Olympic and Hockey Champions Trophy silver medallists, Netherlands, will be joined by Australia (WR: 4), the team they defeated in the final of the 2014 World Cup. The Hockeyroos’ Trans-Tasman rivals New Zealand (WR: 5) will be aiming to continue their fine form in this competition, while Asian rivals China (WR: 8) and Korea (WR: 9) and home favourites Belgium (WR: 14) will also be aiming to impress.

Spain (WR: 10) were the latest team to qualify for the event having finished top of the standings at the Hockey World League Round 2 event held in Valencia, Spain in February.

Three more teams will qualify from the Hockey World League Round 2 events which are currently taking place in locations around the world, with those teams allocated to each of the women’s Semi-Finals on 10 April 2017.

With at least four matches taking place each day, fans will be treated to eight days of non-stop magic as the world’s best women’s teams go head to head as they bid to qualify for the Hockey World League Final, taking place in Auckland, New Zealand later this year, and the Hockey World Cup 2018, which will be held in London, England.

In addition to qualification for those events, vital FIH Hero World Ranking points will be awarded depending on final standings, which could ultimately decide on nations’ qualification for future international events.

The Pool matches will take place from 21-27 June before the classification matches begin on Thursday 29 June, which include the quarter-finals. The winners of those quarter-finals will guarantee qualification for the Hockey World Cup 2018 and, depending on New Zealand’s final standing, a spot in the Hockey World League Final. The semi-finals will then take place on Saturday 1 July with the event concluding on Sunday 2 July, with the final scheduled for 18:00 (CEST). There’s many more exciting matches throughout the week, with the full schedule published on the official event website here.

This is the final edition of the Hockey World League in its current format, with FIH launching a new portfolio of events within the next couple of years. Fans can therefore ensure they are part of history by purchasing their tickets for the last ever Semi-Finals through the official ticket website, here.

Fans can take advantage of early bird prices which include a 25% discount, with tickets priced between €19 and €30 for adults, €6 to €10 for children aged 5-11 and €13 to €20 for youths aged 12-17. Packages for the whole tournament or for the finals are also available now with the same discount.