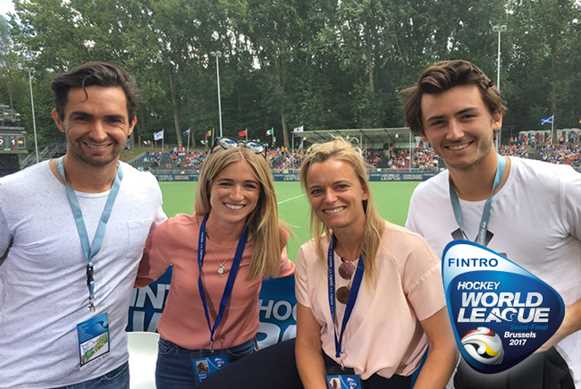 Red Lions and Red Panthers past and present out in force

Members of the Belgium Red Lions and former members of the Red Panthers have been out to lend their support to both the team and the event at the Stade Fallon in Brussels over the past four days of FINTRO Hockey World League Semi-Final action.

International players Loick Luypaert and Arthur van Doren – the 2016 FIH Rising Star – witnessed the Belgium women's 1-0 win over New Zealand while a continuous presence around the ground has been former Red Panther's captain Charlotte de Vos, who has been combining a role as a guest presenter with a more informal role as cheerleader for the women's team.

For de Vos, who represented Belgium more than 200 times, hockey has been an integral part of her life for many years and, despite retiring from the international game after the 2014 World Cup, she has continued to be an ambassador for the sport and still plays at the highest club level in Belgium. She has also taken some of what she learnt from the game and combined it into her new life away from the international scene.

De Vos, like so many retiring players, initially struggled to find what her next steps would be. Leaving the all-encomapssing lifestyle of an elite athlete is a difficult transition and de Vos admits to missing the thrill of competition and the sense of togetherness and camaraderie that exists in team sports. "It is sometimes difficult for me to admit but, yes, I did hit an all-time low.

"When I stopped playing at that level, I had to search for something else to do because I knew my life would be changing dramatically," she explains. "One of the aspects I really liked when I was captain was to inspire the people within the team and I wanted to keep doing that."

Three years on and de Vos now does a lot of hockey coaching and mentoring but has also tapped into her creative side. "I am developing a range of gemstones called 'Lucky Rocks', and the idea is that you give a gemstone that has a meaning – to give confidence or will power.  So, for example, I gave some of my gemstones to the Red Lions before they played in Rio and they were wearing them tied to their shoelaces as they won the silver medal."

For the host nation's spectators and fans, the fourth day of the competition couldn't have gone any better. First, the national team beat New Zealand in an intense 1-0 match to go second in their pool, then members of both the men's and women's team were on hand to sign autographs and chat to fans.

De Vos is full of praise for the new look Belgium team. "I think the team will do very well in the coming years. They had a tough year in 2016 because they missed out on qualifying for the Rio Olympic Games but now they are physically strong and very talented. They also have a new coach and are playing some great hockey. I am very excited for the future of the team."

And she had these words of wisdom for young players coming into the game: "The most important thing for a young player is to enjoy it and have fun. The training is mentally and physically tired but if you are enjoying it, you can get through that. It is also an interesting part of the process to experience both the highs and the lows. You learn what your limits are and how you can push them even further."