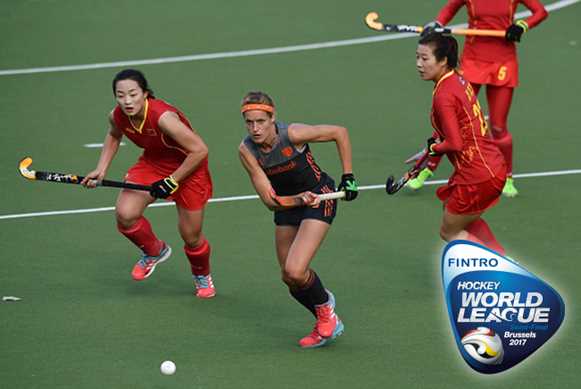 Netherlands lead way in Pool A: Belgium stun Black Sticks in Pool B

World number one team, the Netherlands continue to dominate Pool A at the FINTRO Hockey World League Semi-Finals as they recorded their third victory, a 1-0 win over China. The results mean Netherlands will top Pool A and Scotland are eliminated from the quarter-finals but nothing else has been decided. Both Italy and China could finish second in the pool, but equally Korea or China could finish third, depending upon results in the final pool matches to be played on Tuesday 27 June.

Australia currently top Pool B on nine points, although they have played one match more than their pool rivals. Belgium have moved to second on goal difference from New Zealand, following their 1-0 win over the higher-ranked Black Sticks. The results in Pool B mean that Australia top the pool on nine points, having played one more match; New Zealand and Belgium are on six points each, but Belgium are ahead on goal difference; Spain are next on three points and Malaysia are bottom of the pool, with no wins as yet. This situation means the top three positions are yet to be settled so it all comes down to Tuesday's results.

Two different styles of play were on display for the opening match of Day Four. Australia, the world number four, have shown themselves to be powerful, uncompromising and keen to defence-splitting passes in their previous three games; Spain (WR: 10), by comparison, play a tight, energetic game that works best when using short, sharp passes. The spectators were keen to see how things would pan out.

A very cagey first half saw both teams settle into the pace of the game but it was Australia who were first to breakthrough, Maddy Fitzpatrick, who is enjoying a good tournament, made a great interception on the edge of the Red Stick's circle and fed Kathryn Slattery, who doesn't hesitate to shoot from that position.

Spain evened things up with a neat deflection by Lucia Jimenez, her deft touch in the circle caught Rachael Lynch in the Australia goal unawares as the ball flew into the goal. The goal gave the Red Sticks renewed confidence and Rocio Ybarra was next to take a shot, her reverse stick flying viciously over the bar. However, it was Australia who scored next in this intriguing fixture. Slattery burst through the Spanish defence with a burst of speed and slammed the ball past Maria Ruiz in the Spanish goal to double her tally in the game and, more importantly, put her team back in front.

The Hockeyroos extended their lead further when Georgina Morgan scored from a penalty corner just as the whistle for the end of the third quarter sounded. Australia's speed on the counter was given a full showing when Emily Smith picked up a clearance from a defensive penalty corner and charged down the pitch before slotting the ball into Spain's goal to make the final score 4-1.

"We got a much cleaner execution all over the field today," said double goal hero Kathryn Slattery. "In fact, we cut them apart in the final quarter. For me personally, I perhaps struggled a little in the first two matches but it came together out there and I felt much more natural. I was trapping well and I was able to take the chances cleanly."

With the pools still to be decided, Australia's future opponents at this event remains uncertain but Slattery is keen for the Hockeyroos to test themselves against the world number one, the Netherlands,

"That is a match we always look forward to. In fact, this tournament is a great opportunity to see where all the teams are at. There have been a lot of changes in the top teams, so these are exciting times."

Spain's Berta Bonatstre rued the missed scoring opportunities. Talking to reporter Eliott Dautrebande, she said: "We played well but if you can't score, you won't win. Now we have to beat Belgium to secure third place, because we don't want to meet the Netherlands in the quarter-finals."

Aisling D'Hooghe delivered an outstanding performance in the Belgium goal as the host nation took the points and secured their second win of the tournament and a place in the quarter-finals.

Neither side gave any ground in the first quarter as the players tested each other out. The second quarter saw the higher ranked Black Sticks (WR: 5) pile on the pressure but the Red Panthers (WR: 14) defence held firm, marshalled by the excellent Aline Fobe.

Belgium began to put their own pressure on the New Zealand team. Alix Gerniers stole possession on the edge of the New Zealand circle and her pass was nearly turned in by Joanne Peeters. Seconds later Emma Puvrez was tantalisingly close to scoring as the ball again whistled across the face of Sally Rutherford's goal.

As the half drew to a close, both teams began to develop their own strategies. For New Zealand this involved sharp passes that used the whole pitch and suits perfectly their strong running game. Belgium, by contrast, worked in groups to shut down play and then looked for the break.

The break came unexpectedly in the third quarter. New Zealand were just beginning to get the upper hand – their penalty corner count was rising and the Europeans were looking jaded. However, a penalty corner was saved quite magnificently by D'Hooghe and the subsequent quick counter saw Anouk Raes receive the ball in the New Zealand circle. Her turn and shot flew into the goal to the delight of the Belgium supporters.

With seven minutes of the game left, D'Hooghe made a fine double save as the Black Sticks penalty corner team fired two rockets at the diminutive 'keeper. With Ella Gunson sent off, New Zealand threw all they had at the Belgium's but the lower ranked team showed huge maturity to hold possession as the clock counted down.

Belgium's Joanne Peeters, speaking to reporter Melanie Kreusch, said: "We knew we would be able to play well against New Zealand because we had performed well against Australia. Today we stayed with the game plan. After the goal, we kept pushing and attacking. We wanted to win not a draw. Even though New Zealand had a lot of penalty corners, we were determined not to concede."

Mark Hager was phlegmatic about the result. "We didn't score. We won a lot of penalty corners but we didn't make the most of them. I think some of the newer players were a bit over-awed by the crowd but this is all part of the learning process."

Netherlands dominated possession, had seven times the number of shots on goal and a further four penalty corner opportunities but for more than three quarters of the game, the Chinese defence was unbreathable.

For China, a point would probably have been enough to see them through to the quarter-finals but a win would have made that a certainty. A 2-2 draw against Italy and a 1-1 draw with Scotland have been poor returns for the team ranked eighth in the world. In this game, however, a draw with the world number one side, would have been a remarkable result. As it was, Netherlands showed they were prepared to be patient when the occasion called for it and eventually they were rewarded for their efforts.

China set up their stall to prevent Netherlands from playing the free-flowing style of hockey they had displayed in the previous match against Korea and for the first three quarters it was a successful strategy. The Dutch marauded and made in-roads into the Chinese circle but were always met with a staunch and determined Chinese defence, marshalled as usual by the excellent Cui Qiuxia.

Also playing at the top of her game was Ye Jiao in the China goal, she made several saves in the first two quarters, including a vicious penalty corner from Caia van Maasakker. The game very nearly went China's way completely when Liang Meiyu fired a shot from the edge of the circle but the mid-air shot was saved by Josine Koning in the Netherland's goal. At the other end, Lauren Stam, Carlien Dirkse van den Heuval and Maartje Krekelaar were just a few players who came close to beating the China defence, only to be foiled by Ye Jiao.

Finally, a penalty corner worked for Netherlands as Irene van den Assem shot home to give her side the lead. This was not the end of the drama. China's Gao Lihua nearly equalised as China poured forward and it took quick work by Caia van Maasakker to keep the ball from the back of the net.

Head coach to Netherlands, Ayson Annan said she was pleased by her team's ability to play to the game plan. "We had a lot of tempo but China defended very well. It was important for us to have a 0-0 like that because we had to work hard and be patient. We expected China to play like that and we knew what we had to do."

Laurien Leurink echoed her coach's words: "We knew we would have to be patient and this game would be nothing like yesterday [9-0 against Korea]. This is an important step in our development."

China's goalkeeper Ye Jiao was playing her first game for the senior side. She said she was disappointed that her team had conceded a goal after working so hard to keep the Netherlands at bay but she was pleased by their performance overall.

Korea hit top gear at the crucial stage of the competition as they took the game to Scotland in this match to decide who would be eliminated from the quarter-final stages. Both teams had a loss and a draw coming into the match and, with other results going against them, the loser was certain to finish bottom of Pool A.

Cheon Eunbi scored the first goal as she found a gap in the Scottish defence and fired the ball past Amy Gibson in goal. Scotland were visibly shaken and, although they worked hard, their attack lacked the structure they had shown in previous games. This approach was punished when Cheon Seul Ki took advantage of a penalty corner opportunity and fired home to double her team's lead. After the break, it was Korea who again showed the structure and discipline necessary and Cheon Seul Ki scored her second penalty corner – a well-placed and speedy shot to Gibson's right.

The fourth Korea goal was from a penalty corner variation. Cheon Seul Ki slipped the ball and Shin Hyejeong was on hand to fire home. As Scotland's hopes of a first ever quarter-final appearance at this event evaporated under the Korea onslaught, the Blue Sticks threw everything into the game. They were rewarded with a number of penalty corners but this was not to be their day and Korea extended their lead to five when Cheon Seul Ki scored her third.

"I wish I had managed to score in the earlier games," said Cheon Seul Ki, as she reflected upon her hat-trick. "But this is the start of Korea playing well in this competition."