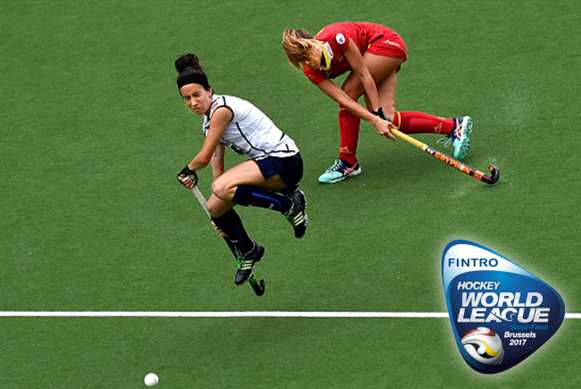 The penultimate day of action at the FINTRO Hockey World League Semi-Final finished with high drama as New Zealand pushed Netherlands all the way but fell short in the penalty shootout. Earlier in the day, Italy upset the rankings by knocking Spain out of the 5th place play-off, while Australia turned on the style to beat Belgium. China sealed their place in the final just as they did in the 2015 edition.

A tense match between two attack-minded teams ended in joy for Italy and heart-break for Spain as the match went to shoot-out and goalkeeper Martina Chirica proved the hero as Italy earned a place in the all-important 5/6th place play-off on Sunday 2 July.

Despite less possession, fewer shots and a lot of pressure from a high-ranked team, Italy took the lead in the 32nd minute of the game and looked to be heading a step closer to World Cup qualification. However, Spain's inspirational captain Rocio Ybarra led her team to an equaliser with under two minutes left on the clock.

The goal sent the game to shoot-out, with Chirico stepping up to save two goals from four attempts.

Spain began this game the stronger and by half time had created several scoring opportunities, including three penalty corners. Martina Chirico was on top of her game in the Italian goal and made some great saves to keep her side very much in the game. As the half drew to a close, Spain continued to press, but they were faced by a solid Italian defence, who were able to deal with the Spanish passing game.

Adrian Lock, head coach to the 10th-ranked Spanish side, speaking at half-time, said his team needed to take their chances or they would be in danger of being hit on the break.

One such occasion occurred two minutes into the second half as Eugenia Bianchi intercepted a Spanish defensive pass on the edge of the Red Stick's circle. Her run at the defence was halted by Maria Ruiz in the Spanish goal and Agata Wybieralska's subsequent penalty corner shot was charged down and cleared.

This spurred Italy on to be more adventurous and a great run and shot by Dalila Mirabella saw Ruiz called into action again.

Minutes later Lock's words proved prophetic as a run by Marcela Casale split the Spanish defence and Elisabetta Pacella had an easy target to place the ball past Ruiz to put the team ranked 16th in the world into the lead.

Drama in the final 10 minutes saw Spain's Lola Riera hit the post and the follow-up shot by Beatriz Perez brilliantly saved by Chirico. But Italy's defence could not withstand the Spanish attack indefinitely and Ybarra was on hand to pop the ball past Chirico.

Lara Oviedo scored the pick of a flawless set of shoot-out goals for Italy to send the lower-ranked team into the 5/6th place match.

"When we conceded a goal with less than two minutes to go, we were very down," said Chrico. "But, we talked and said, we have worked so hard to get here we must now take this opportunity."

A disappointed Berta Bonastre said: "Italy scored but we created a lot of occasions to score and didn't do it but it is the game. Then I missed my shoot-out. Five players take the responsibility to take the shoot-out, but we win with the team and lose with the team."

Australia hit the ground running as they took on the host nation Belgium in the second 5/6th place play-off. Although Belgium found their competitive edge in the second half, the damage had already been done and the Hockeyroos booked their place against Italy in Sunday's crucial match to secure a place at the 2018 Hockey World Cup.

Australia got off to the perfect start when Kathryn Slattery was on target in the fourth minute of the game. Her opportunistic goal was followed three minutes into the second quarter by a rocket of a penalty corner from Maddy Fitzpatrick.

After the earlier sparkling performances from Belgium, this was a very different encounter. The Hockeyroos were full of energy and attacking verve, while Belgium seemed to be fatigued and lacking their previous flair.

Australia took a 3-0 lead when Georgina Morgan stepped up and fired home a penalty corner after some great one-touch passing by her teammates.

The second half saw the Red Panthers coming back into the game, with Alix Gerniers performing her usual tricky stick work to turn the Australia defence inside out. The subsequent penalty corner was chased down and Australia set off on the counter. Elena Sotgui, who replaced Aisling D'Hooghe in the Belgium goal at half-time, was called upon to make a sharp save.

Australia added to their score when Madi Ratcliffe scored from open play after yet more sharp passing between the Hockeyroos midfield. Belgium came back with a rocket of their own when Louise Versavel fired home a penalty corner and this gave the Belgium team a real boost in confidence. Anouk Raes was unlucky not to score when she received the ball wide from a penalty corner and Jill Boon also gave a line of Belgium forwards a great chance to score as she passed directly across the face of Rachael Lynch's goal.

"We knew we hadn't performed against China," said Jane Claxton after the game. "This match we had to make sure we created chances and put them away."

And she added that Italy would be an unknown quantity and "quite unpredictable."

China's Zhang Xiaoxue celebrated receiving 100 caps on the day her team made their way into the final of the FINTRO Hockey World League Semi-Final after a demolition job on Asian rivals Korea. The teams ranked eighth (China) and ninth (Korea) in the world battled through some wet conditions to establish continental bragging rights as well as the opportunity to contest first place against the Netherlands.

Gu Bingfeng scored in the sixth minute of the game from a penalty corner to give China the lead in this all-Asia clash in the first semi-final match. That lead was extended in the 25th minute when Zhang Ying deflected the ball over the Korea 'keeper Jang Soo Ji.

A stroke in the 26th was proficiently put away by Liang Meiyu to leave the Korea team with a mountain to climb in the second half.

The second half saw a more attacking performance from Korea but China are renowned for their defence and today was no different. li Dongxiao marshalled her defence and and Korea attack was effectively smothered.

Speaking after the game, Zhang Xiaoxue said she was very proud to have received her 100 caps on the day China became the first team to make the finals of the FINTRO Hockey World League Semi-Final. She added that her team are "like a sleeping lion; we take a little time to get going and then we become dangerous."

Head coach Wang Yeng added that this was China's best performance at the event to date. "This match was very competitive, much more so than previous matches. I felt we were properly and fully prepared for this match in a way that we possibly haven't been before."