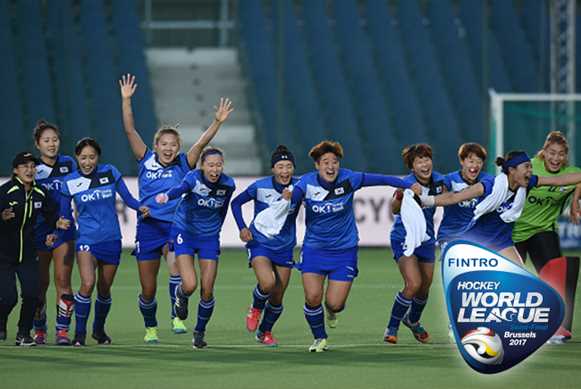 As the teams prepare for the penultimate day of action at the FINTRO Hockey World League Semi-Finals in Brussels, we take a look at the teams contesting the top spots. With the top four teams already qualified for the 2018 World Cup and the Hockey World League Final in Auckland in November, much of the attention will be on who can finish in fifth place – and take the final automatic World Cup qualification spot on offer at this event.

Spain played a strong game against the Netherlands in the quarter-finals and will be looking to take all they learnt from that encounter into this meetings with their European rivals. Both Spain (Hero World Ranking: 10) and Italy (WR: 16) have made tremendous progress since their performances at the equivalent Hockey World League Semi-Final events in Valencia and Antwerp in 2015, and will be looking to be in the mix for the fifth place on Sunday.

Expect Rocio Ybarra to be exhorting her team to finish this event with two winning performances. The Spanish have several danger players but the athlete who has caught the eye with her tenacity has been Berta Bonastre.

For Italy, Jasbeer Singh and Dalila Mirabella are two players who can inspire those around them to lift their game. With the excellent Chiara Tiddy marshalling the defence, Italy are a side that like to attack but are patient and disciplined when under pressure.

Both Belgium and Australia will be licking their wounds after failing to reach the semi-finals. Belgium were incredibly unlucky not to have already booked a place at the 2018 World Cup – their match against Korea was the pick of the quarter-finals in terms of excitement and drama. Australia will be aware that they under performed and will be determined to redress that.

Both teams have the firepower to score goals: in Australia's case it is a question of whether the chances can be converted while in Belgium's case, it is a question of whether they can break down the strong Australian defence. Expect the game to be open and fast-paced because Australia is a team that likes to dominate the whole pitch, while Belgium love to play quick, innovative patterns, which can leave them open to counter-attacks.

Korea and China are two teams who set out their stalls to secure Wold Cup and Hockey World League Final qualifications and both teams achieved that in some style in the quarter-finals. The semi-final match could go one of two ways. This could be a classic encounter between two defensive sides – cagey and tactical rather than spectacular. Alternatively, one or both of the teams might decide to throw caution to the wind and go for a big win and bragging rights over their Asian rivals.

Korea's Cheon Seul Ki is the tournament's top scorer currently, and she is a danger on penalty corners but in the quarter-finals the player who caught the eye was China's Zhang Jinrong, whose speed and stick skill proved the undoing of the Australian defence.

The Netherlands have looked untroubled as they have advanced through the stages of this tournament but they might find the route to the final takes a tougher turn as they meet the Black Sticks. It is fair to say that neither side has yet reached its optimum performance, although New Zealand approached that point in their win over Australia. In other games, New Zealand's notorious speed and physicality has looked slightly off-key and Mark Hager will be hoping that the spark is lit in this semi-final encounter.

On their day, the speed and ferocity of players such as Stacey Michelesen, Sam Charlton and Sam Harrison, plus the strength of Liz Thompson and Olivia Merry, makes the Black Sticks a fearsome opponent.

The Netherlands has a new crop of prodigiously talented players, with the old-timers Margot van Geffen and Carlien Dirkse van den Heuval marshalling. It is difficult to pick out key players as each athlete has the capacity to astonish with their skills. Kitty van Male is an important catalyst for the team; Maartje Krekelaar is a talent for the future and Xan de Waard is living up to all the expectations that she will be a key member of the Oranje team for some time to come.