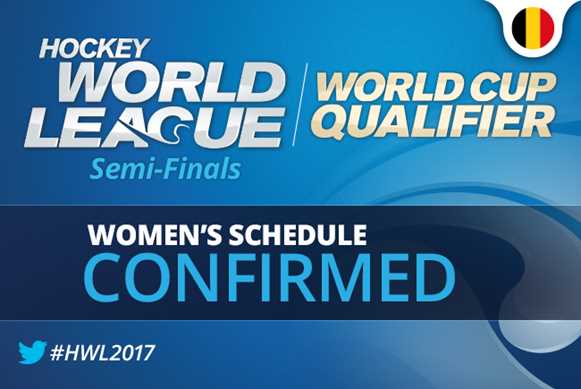 The International Hockey Federation (FIH) has confirmed the finalised schedule for the Women’s FINTRO Hockey World League Semi-Final 2017 in Brussels, Belgium following the allocation of Round 2 qualifiers yesterday.

With at least four matches taking place each day, fans will be treated to eight days of non-stop magic as the world’s best women’s teams go head to head as they bid to qualify for the Hockey World League Final, taking place in Auckland, New Zealand in November, and the Hockey Women’s World Cup London 2018 in England.

The Stade Fallon in Belgium’s capital city will welcome 10 of the world’s best women’s teams between 21 June and 2 July who will compete for qualification for both events.

Several exciting fixtures have been thrown up following confirmation of the Pools, with Netherlands, China, Korea, Italy and Scotland competing in Pool A and Australia, New Zealand, Belgium, Spain and Malaysia in Pool B.

There’s many more fascinating matches throughout the week, with the full schedule published on the official event website here.

Fans can take advantage of early bird prices for today only, which include a 25% discount. Packages for the whole tournament or for the finals are also available now with the same discount and can be purchased here.

The Hockey World League, composed of four rounds and played over two years, shines a spotlight on the sport around the world. Even the smallest hockey-playing nations have the opportunity to write their own chapter in hockey’s history books. Brussels provides the perfect stage for these nations dreams to become reality in what is a crucial event in hockey’s international calendar.

Hero World Ranking points, which can influence qualification for future events, will be awarded to all teams depending on their final standing at this event.