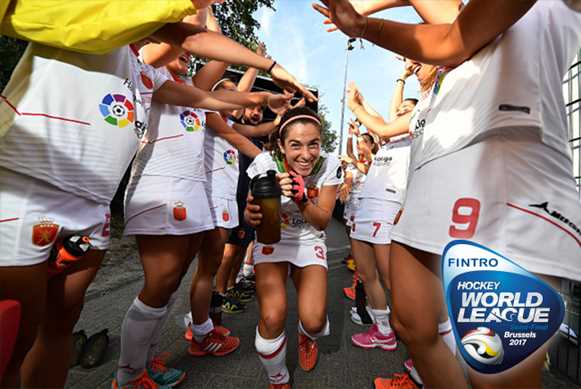 It was a day of celebration for Spain's Rocio Ybarra and Australia's Georgia Nanscawen as both players celebrated winning performances and reaching 250 and 200 cap milestones respectively. Ybarra's achievement is a Spanish national record.

The day itself saw Australia establish themselves at the top of Pool B, with two wins from two matches. In Pool A, things are a little tighter as Korea and Italy, plus Scotland and China both played out a draw.

Early in the day, hordes of youngsters from Belgium schools enjoyed an entertaining afternoon of hockey, and the noise levels increased further when host nation Belgium took to the field later in the day, cheered on by the knowledgeable Belgium supporters.

With the dual prize of qualification for the 2018 Hockey World Cup and a place at the Hockey World League Final 2017 for those finishing in the top slots, this is an event in which every team will be pulling out all the stops to secure as high a pool place finish as possible.

There are rich rewards for the top placed teams. The four highest finishers will go on to compete in the showcase end of year event, the Hockey World League Final in Auckland, New Zealand between 17-26 November.

And five automatic berths are available for the 2018 Hockey Women's World Cup in London, England, although this will increase depending on the outcomes of the upcoming Continental Championships, which are also World Cup qualification events.

A goalless draw between Italy and Korea was, nevertheless, full of energy and passion, with both teams chasing their first win in Pool A. For Italy, ranked at number 16 in the FIH World Rankings, this was a result that confirms their ability to compete with the higher ranked nations. For Korea (WR: 9), a win in their next match is now vital if they are to progress and get one of the all important World Cup and Hockey World League Final qualification spots.

Italy, who drew their first game with China, started much the stronger as they drove energetically and relentlessly at the Korea defence. Lara Oviedo came close to penetrating the Korea defence with a mid-air shot that was saved by Jang Soo Ji. The resultant penalty corner was also well saved. The second quarter saw the Korea side edge back into the game. Pressure led to the Asian team's first penalty corner but Italy's 'keeper Martina Chirico was quick to react with a diving save.

Much of the second quarter was characterised by good build-up in the midfield but little reward in either attacking circle. The tempo and intensity of the game built as the time ticked down but these were two teams who were as concerned about not conceding as they were about scoring. Strong defence on both sides meant that any attacking moves were stopped abruptly in their stride and frustration levels grew on both sides. Italy put the goal in the back of the net but the goal was disallowed as an attacker was judged to have entered the circle too early.

Italy's Eugenia Matstronardi said: "We are very happy with both the results against China and Korea. We knew they would be physical and we had prepared for that. We are playing this and what ever they were expecting, they knew they were going to be physical. Overall they were happy past results.

"We are doing it step by step, the next game is against Scotland and we now hope to secure a win against a lower ranked side. That really is the nature of our team, retake it game-by-game."

Scotland got off to a dream start in their second match in pool A. The Scots took the lead in the eighth minute when Rebecca Merchant slammed the ball into the Chinese goal. This galvanised the lower ranked team – Scotland are ranked 17 in the FIH World Rankings – and they poured forward to put pressure on the Chinese. But, the Asian side, who are currently ranked eighth in the world, are experienced at this level and they continued to keep working to their game plan. The reward for their efforts was scored by Gu Bing Feng, who shot home from a penalty corner to even the score.

"That is my job, my responsibility," said the Chinese striker, speaking after the game.

There was drama in the last minutes of the game as China pushed hard for the winning goal but despite referrals and penalty corners, the Scottish defence held firm and were pleased to take a point from their second match of the competition.

Speaking to Melanie Kreusch of the local organising committee media team, Merchant said: "We were very satisfied with the result. Obviously I was pleased to score the goal in the first few minutes as that gave us a lot of confidence and we played some really good hockey. Now we are looking forward to our match against Italy (WR: 16); we have played two higher ranked teams, so we are looking forward to take all we have learnt and use it against a team of similar ranking."

On the day that Rocio Ybarra celebrated her record-breaking 250 caps for her country, Spain were forced to come from a goal down to secure the points in this intriguing match-up against Malaysia. The Tigeresses took the lead through captain Siti Ruhani as she clinically shot home from a penalty corner in the third minute. Spain were rocked by this unexpected turn of events as Malaysia are currently ranked at 22 in the world, 12 places below 10th-ranked Spain.

Urged on by Adrian Lock on the sideline, Spain turned up the pressure to get back on terms but they were made to wait until the 28th minute by a staunch Malaysian defence. it was Carola Salvatella who turned a ball into the goal as it bounced loose in the circle after sustained Spanish pressure. Spain's second goal came from a penalty stroke, Lola Riera putting the ball calmly past Farah Yahya in the Malaysia goal. It was Riera who scored the Red Sticks third goal – a belter of a shot from a penalty corner after some good work by the Spanish attack had pressured Malaysia into conceding the corner. Malaysia worked hard but Spain were now in their stride and looked capable of scoring with every attack. They had a goal disallowed towards the end of the third quarter and Malaysia dug deep to keep the score at three.

Head coach to Malaysia, Muhammad Dhaarma Raj, said he was pleased with the way his team had performed in both matches in Pool B so far. "We came here ranked 22nd in the world and the teams we play all have Olympic and World Cup experience.

"We are learning with every game and these players are determined to work hard, perform well and turn the spotlight on women's hockey in Malaysia. That is what I am proud of."

Spain's coach Adrian Lock said: "We started slowly and then we got into the game in the middle of the match. We will go away and look at the video to see what we need to work on, but the basics are possession and ball movement."

Two-goal hero Lola Riera said: "I am very happy about the team performance. Of course I was pleased to score but I value how well the team worked together, particularly as we stayed calm when we went behind. The difference between today and yesterday was that we took our chances today."

The final match of Day Two was a fast-paced and exciting game between Oceania champions Australia and host nation Belgium. Although there is currently a 10 place gap between the two teams' FIH World Rankings (Australia are fourth and Belgium are 14th), this was a tense and close encounter. Australia moved into the lead in the first quarter as Georgina Morgan continued to show why she is fast earning a reputation as a penalty corner specialist. From that moment on, the game swung back and forth with Belgium creating as many chances as their higher ranked rivals.

Aisling D'Hooghe in the Belgium goal was on fine form as she saved from numerous Australia attacks but her counterparts Rachael Lynch and Jocelyn Bartram, who shared the 'keeper's spot, were equally busy as the Red Panthers showed creativity and imagination in their attack.

"We were playing the world number four," said Joanne Peeters, "although we would have preferred not to lose, it was a good performance and it gives us a lot of confidence in the next games."

The win was doubly sweet for Georgia Nanscawen who celebrated 200 caps.

"We haven't played Belgium for a while," said coach Paul Gaudoin, "they had some experienced players out there, so I was pleased to get a second win. I thought we played better than the previous game but every match is a step towards improvement.' Action resumes on Satruday 24 June.