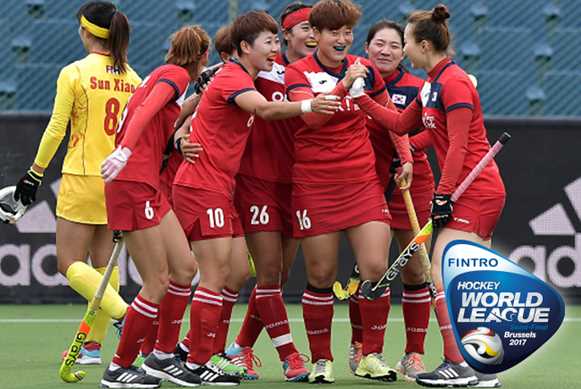 The quarter-final line-up came down to the final match of the final day of pool action at the FINTRO Hockey World League in Brussels. In pool A, with the Netherlands unbeaten in all their matches, the next three teams were scrapping for second and third spot. Eventually it was Korea who made second place after a 2-1 win over China, with Italy coming third and China in fourth.

Pool B saw an intriguing day of action with nothing decided until the final whistle of the day sounded. Spain needed to score four or more goals to move ahead of Belgium but, although they dominated the game, it was a step too far and so Australia won the pool, New Zealand took second, with Belgium third and Spain fourth.

Fast and furious hockey from two rival Asian teams as they both sought to finish as high as possible in pool A. In the end, two breakaway goals from the lower-ranked team sealed second place in the pool.

China (Hero FIH World Ranking 8) needed to win to avoid finishing fourth in the pool – which means an encounter with the pool B winners – while a win for Korea (WR: 9) would move them to second place and a quarter-final match against the third placed team in Pool B.

As expected in a match in which two closely-matched teams who have met on countless occasions, the match was characterised by a lot of hard work and energy by both teams, although there was little by way of shots or meaningful attacks in the circle.

At half-time, China's coach Wang Yang said he was looking for his team to counter-attack with more menace in the second half and his team worked hard to deliver.

The second half saw China really put Korea under attack and for much of the third quarter, China were mostly in Korea's defending end of the pitch.

Playing her 100th time for Korea, Lee Youngsil was at the heart of the Korea defence keeping the China attack at bay. Time and again the defender came away with the ball after some excellent interceptions.

As the third quarter drew to a close, China began to pile on the pressure. Zhang Xiaoxue jinked her way through the Korea defence to win a fourth penalty corner for her team. This was saved by Jang Soo Ji and Korea enjoyed a few seconds let-up from the relentless Chinese pressure. Then, in a move that was totally against the run of play, Korea took the lead through Cheon Seul Ki. Korea managed to break out of their half and a swift move saw them win a penalty corner. Cheon Seul Ki made no mistake as she fired the ball home.

This galvanised China and, at the start of the fourth quarter, Gu Bingfeng was on hand to smash the ball past Li Dongxiao to even the scores. The match seemed to be heading for a draw before Cheon Eunbi broke through the China defence to smash a reverse stick and very emphatic winner.

As she celebrated 100 caps, Lee Youngsil said that her team had really done their homework on the China team and had developed a successful game plan as a result.

New Zealand needed to win this fixture convincingly to challenge Australia at the top of pool B and they started in scintillating fashion when Olivia Merry smashed a goal within five minutes of the start of the game. Unfortunately for the Black Sticks, they were then met by an obdurate Malaysian defence determined to wipe out the memory of the earlier 9-0 loss to Belgium.

Malaysia are a side that has grown in this tournament and the game plan for the remaining 65 minutes was perfect. Brave defence, the confidence to run at their higher-ranked rivals, and an acrobatic display from Farah Yahya in goal was enough to stop the Black Sticks extending their lead.

Malaysia, ranked 22 in the Hero FIH World Rankings, were disciplined as they soaked up the pressure thrown at them by the world number five and head coach, Dhaarma Raj was delighted with his team's first half. "To be only 1-0 down and to have won a penalty corner against New Zealand after we lost 9-0 to Belgium, well that is a step-by-step improvement."

For New Zealand, Merry continued to probe the Malaysia defence and she was backed up by some hard running, particularly from Ella Gunson and Liz Thompson, but this was not their day.

Coach Mark Hager was his usual prosaic self after the game. "We are in the quarter-finals and we will get ready for the next game as usual. It doesn't matter who we face, we will worry about our game. There are some basics we need to get right but we are heading in the right direction."

An absolute cracker of a goal from captain Marloes Keetels gave Netherlands the lead in their match against fellow Europeans Italy.

As the current table toppers in pool A, the Netherlands could have been forgiven for taking their collective foot off the pace but head coach Alyson Annan is always looking for improvement, and so the Dutch lifted the tempo and put the pressure on the team ranked 16 in the Hero FIH World Rankings.

Despite some heroic defending by Italy, led by captain Chiara Tiddy, the Netherlands continued to create chances throughout the half. It was Margot van Geffen who was next to find her way onto the score-sheet. The defender turned midfielder took the ball wide and then cracked a reverse stick shot past Martine Chirico in the Italian goal.

"You should see her in training," laughed Maria Verschoor speaking after the game. "She is always striking them in like that."

Two goals in quick succession from Charlotte Vega and Maartje Krekelaar doubled the Dutch lead in the third quarter and, as the team in orange hit top gear Italy's main concern was to keep the Dutch out of the circle.

The score-line reflects the Dutch domination but does not do justice to the determination of the Italians to play their own style of hockey. The team moved the ball swiftly and forced the Netherlands to work hard for the win. Chirico made some crucial and acrobatic saves, including one from a fierce penalty corner strike, there was nothing the 'keeper could do about Vega's sharp follow-up which made it 5-0 to the world's number one team.

Netherland's captain Marloes Keetels gave her reaction after the game: "That was a decent performance but we are still lacking scoring chances. The defence is doing very well because no-one has scored against us - now we need to work on getting into scoring positions."

The final match of Day Five was a feisty and fast-paced affair between two European teams who have been developing at pace in recent seasons. Spain started the sharper, the team taking the game to the home team and really pressuring the Belgium defence.

It was Spain who drew first blood, in the 24th minute, as Berta Bonastre deflected a penalty corner to give the Spanish a fighting chance of finishing above New Zealand in the pool and avoiding a meeting with the Netherlands.

The Belgium Red Panthers came back time and again but found Maria Ruiz in the Spanish goal on the top of her game. A quick attack sparked by an intercept in midfield resulted in a shot for Anne-Sophie Weyns, but again Ruiz was up to the challenge and cleared cleanly. Pauline Leclef also put Ruiz under pressure when the Red Panthers again went on the search for a goal but her shot, though powerful, was not enough to challenge the Red Sticks 'keeper.

Despite having more possession and more scoring opportunities, the final result means Spain finished fourth in Pool B and will meet the Netherlands. Belgium will face Korea, who finished second in pool A.