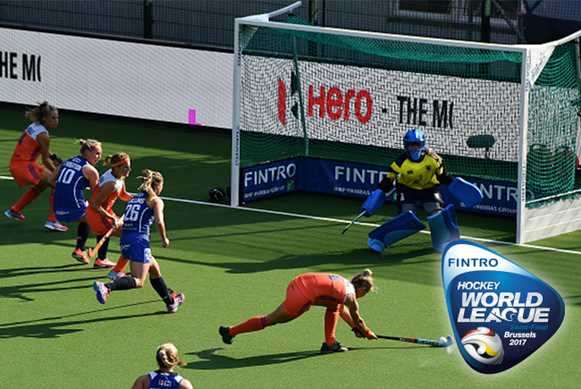 It was a scorcher on the opening day of the FINTRO Hockey World League Semi-Final in Brussels, Belgium, as temperatures reached the high 30s. It was a day that saw the Netherlands present coach Alyson Annan with the perfect birthday present as they showed why they are the number one side in the world.

Australia also found their feet quickly, their young side gelling to beat Malaysia – the lowest ranked team in the competition. In the other two games, Italy and China were evenly matched as they shared the spoils in the opening match of the day and New Zealand battled past Spain in a tightly fought contest.

With the dual prize of qualification for the 2018 Hockey World Cup and a place at the Hockey World League Final 2017 for those finishing in the top slots, this is an event in which every team will be pulling out all the stops to secure as high a pool place finish as possible.

There are rich rewards for the top placed teams. The four highest finishers will go on to compete in the showcase end of year event, the Hockey World League Final in Auckland, New Zealand between 17-26 November.

And five automatic berths are available for the 2018 Hockey Women's World Cup in London, England, although this will increase depending on the outcomes of the upcoming Continental Championships, which are also World Cup qualification events.

In the opening Pool A match, China took an early lead through Gu Bingfeng as she converted a penalty corner in the third minute of the match against Italy (World Ranking: 16). China, ranked eighth in the FIH World Rankings looked much the stronger side in the opening encounters as they camped in the Italian half. Goalkeeper for Italy, Celina Traverso was called into action and pulled off some great saves to keep her side in the game. But Italy are always willing to take the game to their opponents and this was no different. With just three minutes left before half-time, Lara Oviedo took the ball neatly round a defender and slotted the ball past 'keeper Li Dongxiao to even things up.

The third quarter was an even-matched affair with both sides creating chances but neither able to find that final breakthrough. China were structured in their build-up and defence but Italy were always on the prowl seeking the quick break. This continued in the opening minutes of the fourth quarter. Chiara Tiddy was influential at the heart of the Italian defence, keeping the Chinese attack at bay. The breakthrough came when Wu Mengrong found the target after some good pressure from China. The game seemed to be going with the rankings until three minutes from the end when Eugenie Mastronardi tucked the ball away to even things up after some good build-up from Carolina Pereyra.

Martina Chirico, the Italy goalkeeper, said of her team: "Italy's game is to react to goals, so when China scored, we knew to go out and counter-attack immediately. Our ambition here is to get better with every game."

The Hockeyroos took a hold of this game in the opening period of play when Maddy Fitzpatrick got on the end of a fierce penalty corner shot to put the team ranked fourth in the world into the lead against Malaysia. Despite going behind, Malaysia were very quick to put Australia under pressure, with Norfaiezah Saiuti shooting from the top of the circle to challenge Rachael Lynch in the Australia goal. The lowest ranked team at the tournament (WR: 22) caused more problems for the Hockeyroo defence as they won a penalty corner towards the end of the first half. Lynch dealt with the shot and the Australia side showed their pace with a quick counter-attack. Malaysia's 'keeper Farah Yahya was out quickly to smother the threat.

The fourth quarter saw Australia extend their lead when Fitzpatrick scored her second – again a strong penalty corner shot that flew past the Malaysia defence. Minutes later Georgina Morgan made it 3-0.

"This team is really gelling together on and off the pitch," says Karri McMahon, captain of Australia. "We have some things to work on – turning our press into scoring opportunities for example and raising our overall skill level – but I truly believe we have a gold medal winning team that is capable of taking Australia back to glory days."

Scotland's first foray into Hockey World League Semi-Final action was a bruising encounter with the world number one team, the Netherlands. The Dutch side opened their account in the sixth minute as Frederique Matla rasped a shot past Nicola Cochrane in the Scottish goal. The lead was doubled at the end of the quarter when Laurien Leurink scored after a period of pressure on the Scottish defence.

Following the half-time break, Netherlands resumed their domination of possession and were rewarded with an eighth penalty corner. A triple switch saw Lauren Stam with the space to slam the ball past Cochrane to make it 3-0. The fourth goal came as a result of some great build-up play by Carlien Dirkse van der Heuval, who drifted past two defenders before slipping the ball to Kitty van Male who pushed it home.

Scotland continued to play their game and forced a corner in the dying minutes of the game when Nikki Llyod, who was playing her 100th game for Scotland, was stick tackled as she strove to weave through the orange defence. The corner effort didn't work out but Scotland would have been heartened by the resolve they showed during this game.

Frederique Matla spoke of "some things we wanted to focus on before the game, which I think we achieved," as well as adding that the defending World Champions were still a new, young side that was developing with every game.

Scotland's head coach, Gordon Shepherd said he was "delighted with the way his team had played as a tight unit and defended against the world's best team, while Nikki Lloyd added that winning her 100th cap in a match against the Netherlands was a "dream come true." The midfielder said she burst with pride every time she played for her nation.

There were two distinctive styles on display as New Zealand (WR: 5) and Spain (WR: 10) faced each other in the fourth match of the day. Olivia Merry got the Black Sticks off to a flying start as she slammed the ball home from a penalty corner in the 19th minute of their pool B encounter with Spain.

The next two quarters were end-to-end as the Spanish team showed some silky skills in build-up play but failed to really trouble Sally Rutherford in the New Zealand goal. For their part, New Zealand played with a lot of pace and physicality and strung some space-creating passes together as they used every inch of the pitch.

The final quarter was the epitome of two teams determined to make their mark on this event. New Zealand knew they need to remain disciplined to protect their lead but they still played their usual attacking game whenever they gained possession. Spain pushed and pushed but a good save by Rutherford kept the Red Sticks out and gave her side the three points.

"Spain are playing really aggressive hockey, very much how we like to play," said New Zealand's Ella Gunson. "We were really pleased to beat them because in the four test matches we played just before this tournament we lost two and drew two. We would like to have scored more but to get off to a three point start."

Berta Bonastre of Spain said, "We were not happy with the result but yes, we were very happy with the way we played. We had more possession and more attacks on the goal. New Zealand played more defensively. For us, it was a time to learn about the pitch, the environment and to adapt to the conditions and pace of the tournament."

"We still have three matches left and we will take it match-by-match."