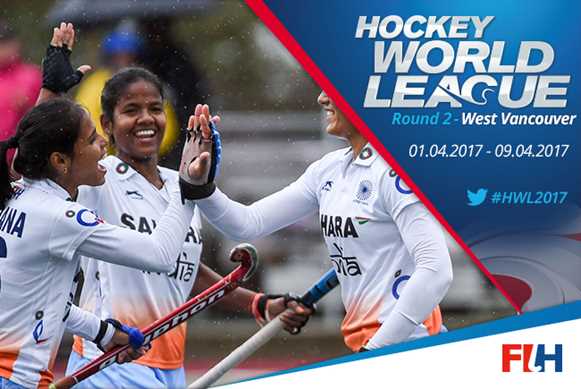 India and Chile set for HWL showdown in West Vancouver

Canadian weather was at its finest and wettest and all teams combatted torrential rain and a pooling field but the competition level was just as high as the stakes, writes Ali Lee for the PAHF.

Canada dropped Trinidad and Tobago by a lopsided scoreline to move to play Mexico for fifth place. India was firing on set pieces to eliminate Belarus and Chile ousted their south American rivals Uruguay.

5/7th Classification: Canada v Trinidad and Tobago 8-0
Relegation to the bottom classification games and heavy, heavy rains didn’t seem to dampen the Canadian spirits in their match against Trinidad and Tobago for 5/7th placings. Canadian midfielder Hannah Haughn showed no signs of slowing down as the West Vancouver native went on her own into and through the circle to lift her side 1-0 just four minutes in. Shortly after Haughn earned Canada’s first penalty corner and the rebound was put in by Brienne Stairs to double Canada’s lead. Torrential rains and pools of water slowed the game immensely and forced both teams to look for aerials and lifted passes whenever and wherever they could.

Canadian defenders Karli Johansen, Danielle Hennig and Shanlee Johnston all got on the board before half time. The waterlogged pitch did no favors for either team but Canada were able to tack on three more goals for an 8-0 victory. Stairs finished with three goals, while Hennig notched two. Canada will now play Mexico on 9 April for 5/6th place, while this is end of the World League campaign for Trinidad and Tobago.

Semi-final: India v Belarus 4-0
It was a fast-paced start for the first semi-final of the tournament with Belarus pressuring India early and as a result earning two penalty corners. Indian keeper Savita was in fine form despite her team not having played a game in five days. Against the flow it was India that capitalised first as Barla Anupa earned her team’s first penalty corner and Kaur Gurjit’s low flick beat Belarussian keeper Maryna Navitskaya for a 1-0 India lead.

In the 20th minute India were awarded a penalty stroke and captain Rani rang the backboards on a low flick to double India’s lead. Belarus were unable to beat Savita and it remained 2-0 for India entering half time.

Rani Poonam set up her captain for the game’s third goal, also Rani’s third of the tournament, to give India the 3-0 advantage in the 40th. Belarus had plenty of penalty corner chances including shots from Ryta Batura and Yuliya Micheichyk but Savita steered all attempts at goal to the side. India earned their fourth goal from the stroke mark as Kaur Gurjit flicked home her second of the game and India's fourth.

Semi-final: Chile v Uruguay 2-1
South American rivalry was evident right from the opening whistle and the game flowed from end-to-end. Chile earned their first penalty corner thanks to the stick skills of Denise Krimerman, who was also playing in her 100th match today. Captain Camila Caram’s initial sweep shot was blocked but the rebound was put in by Sofia Walbaum to give Chile the all-important first goal to go up 1-0 in the 13th minute.

The second quarter’s pace slowed down as the team’s traded turnovers in the midfield. Uruguay’s defence was well anchored by Agustina Nieto, while up from Maria Teresa Viana Ache was the most threatening. The third quarter was at a stand-still as neither team gave much room near their circles.

Trailing for most of the game, Uruguay came out firing in the fourth. A penalty corner shot by Carolina Mutilva was perfectly deflected up into the net at the near post by Viana Ache to tie the game in the 47th minute. Chile responded in the 56th minute after Krimerman put away a loose ball after a defensive miscue. The Chileans did well to maintain possession and ultimately, securing the second and final spot from this event to the Hockey World League Round 3.

To learn more about how the teams progress through the competition in the hope of reaching the 2018 Hockey World Cups, click here, with more details about all of the HWL events available by clicking here. You can keep track of the tournament in West Vancouver on the official competition pages by clicking here and on FIH’s social media channels using the #HWL2017 hashtag. Photo courtesy of PAHF/Chris Wilson/Yan Huckendubler.