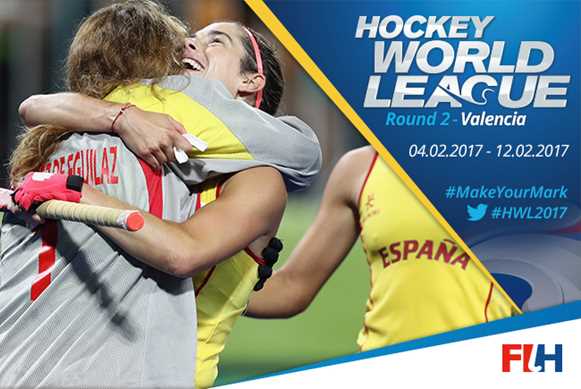 The second Hockey World League Round Two event for women’s teams bursts into action in Valencia, Spain this weekend with the first matches played on 4 February. The prize for the top placed teams is a place at the Semi-Finals later this year and the chance to qualify for the 2018 World Cup.

This round throws together some intriguing match-ups with many opportunities for upsets within the rankings. Ghana, currently ranked 27th in the FIH Hero World Rankings, will be a team that may throw a few surprises, particularly as they are accompanied by Darren Cheeseman – a high performance coach from the UK – who has been working with the Ghanian side as part of the West Africa Targeted Assistance Programme.

The West African side won their Round One event easily and, in November 2015, were only beaten by a much higher ranked South Africa in the Africa Cup.

The opening Pool A game is an intriguing fixture between the side ranked 25th in the world, Czech Republic and Turkey, ranked 37th.

Hockey in all its forms, within the Czech Republic, is flying high at the moment as the women’s junior side were recently crowned European Indoor Champions, so expect the team, led by Adela Bizova, to be full of confidence and looking for a podium finish.

Also in Pool A is the team that must be one of the favourites for the title, Spain. Home advantage, a top ranking of 10th in the world, experience of the Rio 2016 Olympics fresh in their mind, and, in captain Georgina Oliva, a player who can turn matches with her midfield magic. Oliva is backed up by the highly experienced quartet of Berta Bonastre, Carlota Petchame, Maria Lopez and Beatriz Perez.

The fourth team in Pool A is Russia. Currently ranked 28th in the world, Russia opens it’s account with a tricky match against Spain. How they emerge from that match will determine the remainder of their tournament. A good start will leave them in a positive mood for their other two pool games – and eyeing up the prospect of a podium finish.

Pool B sees the second lowest ranked team, Ukraine, up against some tough opposition from Scotland (17), Poland (21) and Ghana.

The opening Pool match will see the two eastern European countries face off, so expect two similar styles of play. Hockey players in both Ukraine and Poland have been involved in the indoor season recently, so expect to see some skill transfer from the indoor game to the outdoor game, with structured build-up and good close control. Poland’s advantage will lie with the team’s experience. In Marlena Rybacha, they have a world class player, who can turn a game with her skill.

Ghana versus Scotland may well be the pick of the games on the opening day. Scotland come to Valencia with high hopes of a podium place and a crack at Hockey World League Semi-Finals. They are a team that is rebuilding after some high profile retirements, but this is also a side that boasts three players recently selected for the Great Britain hockey programme: Sarah Robertson, Amy Costello and Nicola Cochrane.

Their rivals will pose a challenge to the Scots as they play a very different style of hockey to that encountered in European competition. Fast, feisty and unpredictable: coach Cheeseman has called his charge’s skills “frighteningly good”.

The top two finishers from the women’s Round 2 events in Valencia, Spain and West Vancouver, Canada (1-9 Apr 2017) will join Ireland and Malaysia [qualifiers from Hockey World League Round Two in Malaysia] in qualifying for the Hockey World League Semi-Finals. These Round Two qualifiers will also be joined in the World Cup qualifier phase by the two highest ranked of the third placed finishers from those three events.

To learn more about how the teams progress through the competition in the hope of reaching the 2018 Hockey World Cups, click here, with more detail about all of the HWL events available by clicking here. You can keep track of the tournament in Valencia on the official competition pages by clicking here and on FIH’s social media channels using the #HWL2017 hashtag.