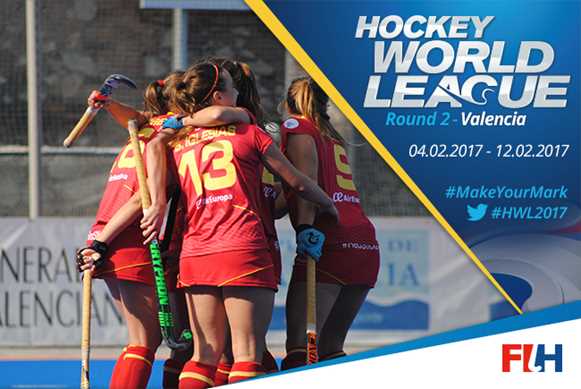 Host nation Spain beat Poland after a HWL R2 campaign that demonstrated how much the team had learnt during both their recent Olympic experience and on the back of a strong 2015 HWL campaign. Scotland beat Ukraine for third spot – a result that could be vital when the final teams are announced for the HWL Semi-Finals being held later this year in South Africa and England. The Czech Republic beat Russia in a tremendously close encounter to decide fifth place, while Turkey upset the rankings when they beat Ghana – again an intriguingly close and hard-fought match.

With Spain ranked 11 places above them, and riding on a double wave of vociferous home support and confidence from a great campaign, Poland was always going to be the under dog in this match. In fact, Poland’s captain Marlena Rybacha, had already alluded to the fact that her team had surpassed expectation by making it to the final: “To be honest, I think we were surprise of the tournament. We didn’t come here as the highest ranked team, and with not a great preparation, so no one really expected us to be in the final.”

While Poland are delighted to have qualified for the next stage and to still be in with a chance of qualifying for the 2018 World Cup, they will be very aware that they have some work to do before June, if they are to close the gap on Spain. This highly impressive Spanish team has gone through the competition looking more assured with every performance. A tough match in the semi-final against Scotland was perfect preparation for the encounter with an obdurate Polish defence.

The deciding goals came from two of the more experienced players in the team. Beatriz Perez has more than 120 caps for her country and in this tournament, she has added two more goals to her tally. Her latest, from open play in the ninth minute, set her team on the winning trail. The second goal didn’t come until the 56th minute as Poland had worked incredibly hard to contain the busy Spanish midfield and attack. When it did come, it was again through open play, with Begona Garcia (58 caps) finding the net and scoring her fourth goal of the competition.

Speaking after the event, a delighted Adrian Lock said: "I believe that this team can go as far as it wants. At the moment we have a little way to go to challenge top seven sides on a regular basis, but with the experience of these first four years behind us and with the vast majority of the group continuing, with the addition of some exceptionally talented under 21 players, I have no doubt that we have the talent. We'll keep improving physically and technically, and we are gradually gaining experience and maturity. This tournament has shown that we can be strong mentally and now its a case of getting our heads down and doing the ground work to be able to compete with all the top teams in the HWL Semi-Finals, the Europeans and, if all goes really well, the HWL Finals too.

Scotland and Ukraine played out a tightly defensive game with just a single penalty corner from Alison Howie separating the two teams. This was scored in the 30th minute, and despite a determined and disciplined response from the Ukraine side, there was no way that Scotland were going to give up on third place in this competition.

Gordon Shepherd’s team must now wait to see if they can still qualify for the HWL Semi-Finals in Belgium and South Africa. Under FIH regulations, two places can be awarded to the highest ranked teams finishing third. Scotland’s fate depends upon the outcome of the third Round Two event, taking place in Canada in April.

The final minutes of this match was as close as the rankings (Russia 28, Czech Republic 25) suggested it would be. In the end, Czech Republic prevailed but a Russian fightback kept the spectators on the edge of their seats until the final whistle.

The opening quarter seemed to indicate that Czech Republic would cruise to victory as the team sped to a 2-0 lead. The goals came in the seventh and 14th minute, the opener from Katerina Lacina – a neat goal after some good build up play – and the second from a penalty corner. Barbara Haklova delivered the perfect strike.

The Czech Republic were then forced to wait until the 42nd minute as Russia came to terms with the speed of the game. This time it was Nikol Babicka who scored from open play.

Russia finally found their stride in the final quarter and Marina Fedorova and the tournament’s top scorer Bogdana Sadovaia both found a way past the Czech defence to bring the score to 3-2. This come back was despite being reduced to 10 players after Aleksandra Leonova was sent off for 10 minutes in the 46th minute. The Russian effort was too little, too late for Anthony Thornton’s side but the Czech Republic would have been relieved to hear the final whistle.

Turkey came to Valencia as a reserve team but the southern Europe side have won fans and earned plaudits for their determined and skilful play. They finished the tournament in style by beating the higher ranked team of Ghana in a thrilling match that kicked off finals day in the Valencia HWLR2.

Turkey took the lead in the fifth minute through the prolific Perihan Kucukkoc but that lead was wiped out two minutes later when Nafisatu Umaru evened things up through a penalty corner. Ghana then moved into he lead when Ernestina Coffie slotted home a penalty corner.

One thing has been evident at this event and that has been Turkey’s resilience and so it proved again. Ghana played free-running and skilful hockey but Turkey stuck to their defensive responsibilities and looked for counter-attacking opportunities. These came in the form of two penalty corners, which Kubra Guzelal and Kucukkoc both took full advantage of.

The final score, 3-2 to Turkey, was against the world rankings but fully deserved.

For details of the Hockey World League, click here.