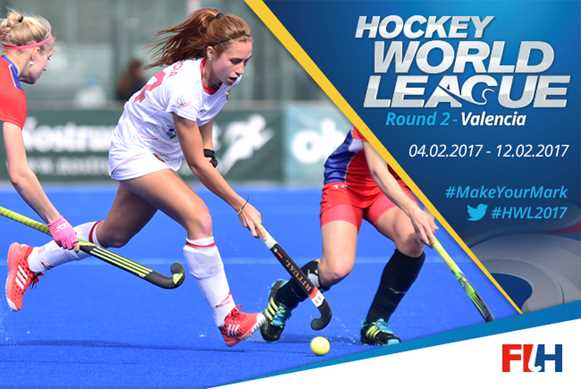 The Hockey World League Round Two (HWLR2) event, held at the Virgen del Carmen-Beteró Sports Centre in Valencia, provided a second day of high octane hockey action. Goals rained down and silky skills wowed the fans as the two pool leaders extended their unbeaten runs and moved one step closer to a chance to compete for a place at the 2018 World Cup.

Pool A leaders Spain stunned the Czech Republic with a goal scoring masterclass to strengthen their lead in Pool A, while in Pool B, Scotland beat Poland in a narrow and tense encounter between two closely matched teams. The results leave Spain and Scotland top of their pools, with the final round of pool matches taking place on 7 February.

Russia quickly recovered from the opening defeat versus Spain by producing a very good performance against the lowest ranked team, Turkey. Anthony Thornton's team showed no mercy as they put away seven goals, recovering their confidence in the process. Irina Osipova (2), Valeriia Borisova, Kseniia Svezhentseva, Marina Fedorova, Svetlana Eroshina and Bogdana Sadovaia scored the Russian goals. Krivoshei is the high-scoring player of the event so far with five goals.

This was an encounter between two teams who had got off to a winning start in Valencia. But it was Adrian Lock's Redsticks who were quickest to get on the scoresheet through a first quarter penalty corner from Xantal Giné. Spain created many more chances but the Czech Republic held strong and the sides remained separated by the single goal until the final quarter. Then the goals poured in… five goals and many more opportunities. Alejandra Torres Quevedo, Carmen Cano, Carola Salvatella and Begoña García all found the net for the home side, while Klara Hanzlova scored a consolation goal for the Czech Republic.

Scotland continued their winning ways with a single goal victory against Poland. The result will be a blow to Poland who came to the event with high hopes. The east European side will need to bounce back in their final pool match against Ghana to restore confidence. Robyn Collins scored Scotland’s goal from a well-struck penalty corner.

Ghana and Ukraine played out an exciting and closely-matched fixture that left the teams inseparable at the end of full time. Rachel Bamfo and Cecilia Amoako scored for Ghana, but their strikes were cancelled by Ukraine’s Oksana Ponomarenko and Viktoriya Stetsenko. At the shootouts round, Ghana prevailed thanks to the superb performance of the goalkeeper, Bridget Azumah.