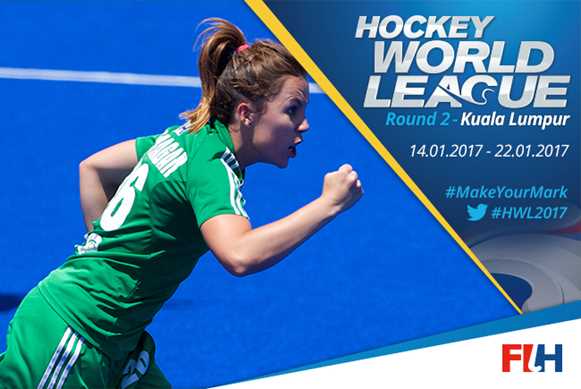 The Hockey World League blasts back into action this weekend as the first of six (three women’s / three men’s) Round 2 competitions gets underway at the Stadium Hoki Tun Razak in Kuala Lumpur, Malaysia.

The women’s event, which takes place between Saturday 14 and Sunday 22 January, will see Italy, Ireland, host nation Malaysia, Thailand, Wales, Kazakhstan, Hong Kong and Singapore battling for a top two finish to guarantee a place in the Hockey World League Semi-Finals, where those coveted berths at the women’s Hockey World Cup 2018 in London, England are up for grabs.

Like all of the Round 2 events, the competition in Kuala Lumpur will witness a clash between teams that came through the first phase of the competition against sides that were automatically given a bye through to Round 2 due to their higher placement in the FIH Hero World Rankings. The highest ranked teams will enter the competition at the Semi-Final stage of the Hockey World League.

The competition will feature two pools of four, with the finishing positions at the end of the pool phase determining the line-up for the quarter-finals, which begin on Thursday 19 January.

Italy (FIH Hero World Ranking: 15) are the top ranked team in the event and will certainly be seen as the favourites to emerge top of the pile in Pool A, where they face Wales, Thailand and Singapore.

Italy’s experienced captain Chiara Tiddi has the potential to be one of the star players at this event, and she will be hoping her team can get off to a winning start when they face Wales on Saturday.

Wales (WR: 32) finished second behind Russia at the Hockey World League Round 1 event in Douai, France, gaining deserved confidence from three victories in four matches to reach the second phase. They will be determined that their journey does not end here.

Thailand (WR: 31) and Singapore (WR: 43) also go head to head in Pool A on the opening day. Both teams qualified from the Round 1 event hosted by the Singaporeans, with Thailand claiming first place and Singapore finishing third.

The meeting between the two sides in Round 1 ended with Thailand taking a 2-0 victory, with star player Tikhamporn Sakunpithak - who captains the team in Kuala Lumpur - netting one of her 13 competition goals on her way finishing the event as top scorer.

In Pool B, Ireland (WR: 16) are the top ranked side and arrive at the event determined to keep alive their dream of qualifying for the World Cup for the first time since the 2002 competition in Perth, Australia.

With seven players on their roster having made over 100 senior international appearances, including the 200 capped Shirley McCay and Cliodhna Sargent, they will certainly fancy their chances of making progress on that goal in Kuala Lumpur.

Ireland start their campaign against Kazakhstan (WR: 33), who qualified for this event with a second place finish at the Hockey World League Round 1 competition in Singapore. Natalya Gataulina top scored for Kazakhstan with six goals, and will be aiming to make a similar impact in Kuala Lumpur.

Also in Pool B, host nation Malaysia (WR: 21) get their campaign underway when they take on Hong Kong (WR: 37), who finished fourth at the Round 1 tournament in Singapore. With home advantage and a higher ranking, Malaysia will be seen as favourites for the contest, but Hong Kong will be keen to upset the odds.

The top two finishers from the women’s Round 2 events in Kuala Lumpur, Valencia, Spain (4-12 Feb 2017) and West Vancouver, Canada (1-9 Apr 2017) are certain to qualify for the Semi-Finals, being joined in the World Cup qualifier phase by the two highest ranked of the third placed finishers from those three events.

To learn more about how the teams progress through the competition in the hope of reaching the 2018 Hockey World Cups, click here, with more detail about all of the HWL events available by clicking here.

You can keep track of the tournament in New Delhi on the official competition pages by clicking here and on FIH’s social media channels using the #HWL2017 hashtag.