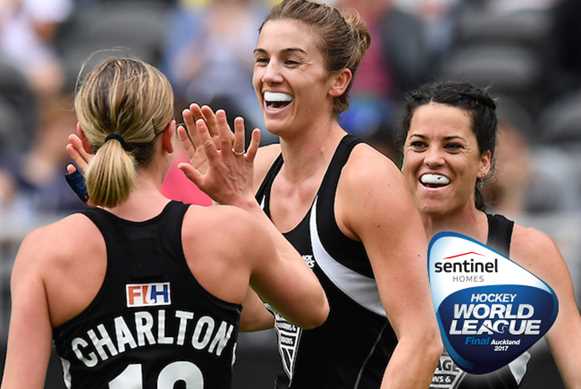 New Zealand will be hoping home fans can inspire them to victory in Auckland Photo: FIH/Getty Images

Sam Charlton and Sally Rutherford are two long-serving New Zealand players who have been part of a squad that has been on the verge of greatness for some time. Two fourth place finishes at the London and Rio Olympics; a silver at the Hockey World League Final in 2015 and a bronze in Brussels at the FINTRO Hockey World League Semi-Finals and it is clear this is a team that is consistently good without breaking through the final barrier.

Now the Black Sticks have a chance to win big on home soil as New Zealand prepares to host the Sentinel Homes Hockey World League Final for the first time.

Midfielder Sam and goalkeeper Sally took time out of their tough training schedule to talk about their hopes for the event and with her usual straight talking, Sally addressed the issue of not making it over the finish line in the hunt for medals: “Typically we have not done well in the last two games of major tournaments, however, the team we have now has experience of regularly playing for medals, and it was pleasing to see that we could bounce back from such a narrow semi-final loss against the Dutch to get third place at Hockey World League Semi-Finals. We have proven we can win medals, now we have to prove we can do it regularly.”

Both women were also upfront about the Black Sticks poor record in shoot-out situations, something that has cost them medals on a number of occasions.

“We don't hide behind the fact that we don't have a successful record when it comes to shoot outs,” says Sam. “We know it is something that has let us down more than once and know it is something we need to work on, but we are confident in our ability to be able to win one. We are trying to implement a range of different approaches technically, tactically and mentally to ensure that we will be successful.”

“And”, added Sally with a rueful smile: “We can’t get much closer than we did in Brussels [against the Netherlands] – we were 0.2seconds away from winning I believe.”

This is the first major international that New Zealand has hosted at its new national stadium in Auckland and both players are looking forward to playing in front of a home crowd, although they admitted that there would be some additional pressure and a higher-than-usual expectation upon the team.

“We do need to make sure we don’t get distracted by being so close to home,” said Sally. "We spend so much time travelling as a team that we are a pretty tight knit bunch on and off the turf, and will need to make sure nothing changes that.”

The Black Sticks have been through some tough training since their third place finish in Brussels and a recent encounter with Australia at the Oceania Cup [they finished second to Australia] gave them some challenging opposition in the run-up to the Sentinel Homes Hockey World League Final.

“We need to get three points against the Dutch. You can’t ask for a better start than playing the top team in the world at home in the opening game of the tournament.”
Sally Rutherford, New Zealand

For Sam, Brussels highlighted some areas the team needs to improve upon before they face the seven best teams in the world. “We didn't quite hit the mark in Brussels, and finishing third was below our target that we had set for ourselves, so there are definitely some aspects of our game both technically and physically we are working to improve.

“We know that in Brussels we weren't as clinical in the attacking third as we would have liked to have been so this is something we have been looking to implement in training. Efficiency in both attacking and defensive circles is key to winning matches so our coaches work with us to ensure we are always improving in these areas.”

The opening game for New Zealand is a re-run of the semi-final in Brussels earlier this year as they face the world number one side Netherlands. It is an encounter that the Black Sticks goalkeeper is relishing. “The better the team, the better the challenge,” she says, adding that her favourite moments in a game usually involve a match-up against the drag flickers. Sally Rutherford versus Caia van Maasakker is all set to be an epic battle in the opening match of the tournament.

For New Zealand, as with every other team at this event, a longer-term goal is the Hockey World Cup in London next year. As Sally points out, this is a great opportunity to get more experience against the top teams in the world: “We don’t often get the European teams coming down to New Zealand, so having the chance to play them on our turf is great, for this team, and for our young kids to see the different styles of hockey that the European teams play.

“For us, it will be our last chance to match up against the European teams before the World Cup in 2018. Argentina and the Asian teams play such a different style to ourselves that the more chance we get to play them the better.”

Of course the players and coaches will be totally focused on the action at North Harbour but when it comes to down time, Sam has this advice: “My ideal morning in Auckland would be a walk along one of the many beaches around the area, such as Takapuna Beach, followed by a coffee and brunch at some of the best cafes around. There are so many beautiful locations around the area so make sure you get outdoors and explore.”

For Sam, who is approaching 200 caps for her country and Sally, who has more than 150 caps, the Sentinel Homes Hockey World League Final is a chance for the team that has promised so much to deliver.

“We know that we can't afford to have one or two 'off' games in a tournament, so we think consistency is key and we know that if we prepare well going into the tournament in Auckland we can certainly achieve that,” says Sam.

“We need to get three points against the Dutch,” says Sally. “You can’t ask for a better start than playing the top team in the world at home in the opening game of the tournament.”